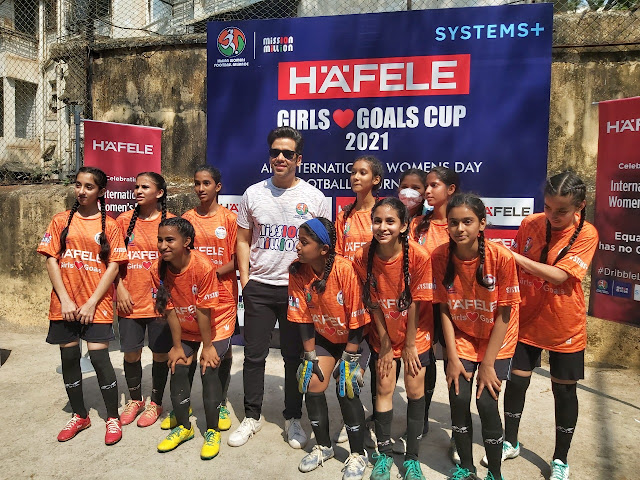 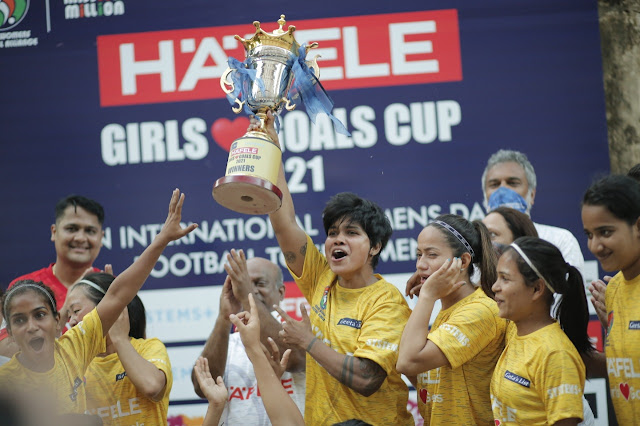 To encourage women empowerment through sports, Häfele India, together with IWFA (Indian Women’s Football Alliance), sponsored a one-day long football tournament entirely organized by and for women. The tournament held on 6th March at St. Joseph Ground, Mumbai, saw a fierce competition among ten teams comprising of girls aged between 16 and 32 from underprivileged backgrounds brought together by different NGOs. Each team played for a specific cause such as ‘Education sets me free’, ‘Dowry kills dignity’, ‘A blessing called Beti’ and so on and had a renowned face as their team mentor along with support-mentors to uplift their spirits during the day. The team mentors included Kunal Kapoor, Tusshar Kapoor, Rahul Bose, Nandita Shah, Adhuna Bhabani, Bhairavi Jaikishan, Ankit Tanna, Richa Bahl, Nitasha Gaurav, Chef Sarita Pareira, and Nishrin Parikh. Kunal Kapoor, supporting the ‘Slum Soccer’ team said, “Through this team, we are supporting the 'Silence Fuels Violence' cause and truly hope that this initiative brings awareness on speaking up for any wrongdoing against women in the society.” Rahul Bose, cheering for Akshara Superstars, said, “I am so happy to hear that the Indian Women’s Football Alliance (IWFA) kicked-off their first competition called ‘Girls Love Goals’ - what a fantastic name! The ten girls’ teams pitted against one another each playing for a specific cause is a brilliant way to spread awareness.”
As a homage to Women’s Day, the tournament was created entirely for women by women sporting female coaches, referees, lineswomen, nutritionists, as well as therapists. The IWFA Girls Love Goals Cup is a tribute to sportswomen across India, who have used their grit, determination, blood and sweat to get where they have reached today. It is also a shoutout to girls across the country to stand by their goals in the face of gender, race, colour, or any such discrimination. The winning team gets a cash prize, proceeds of which are given to select NGOs that use football as a medium of social change for women across India. “I think we're just at the tip of the iceberg and we really need to create a mountain of hope, a mountain of success and victory for these girls so that the future is bright for our kids for their kids, especially women who are always side-lined with sport that are predominantly male centric. The most important thing is to break stereotypes that only certain kind of women can play sports or that women don't like to play sports or that people don’t like watching women play sports. The mindset needs to change, once that happens, the rest will follow,” concluded Tusshar Kapoor, summing up the spirit of the initiative.
Häfele believes that all individuals are responsible for their own thoughts and actions, all day every day, irrelevant to the gender. Sanjay Swami, Head of Marketing, Hafele India Pvt. Ltd. says, "You will notice that we as an organization challenge encourage and uplift our women colleagues constantly. Being a patron for promoting women football for the past three years in India, Häfele has extended its support to IWFA Girls Love Goals football tournament to celebrate the International women’s day this year. Our Theme, “Equality has no Gender” also promotes our beliefs."A number of Häfele India’s previous initiatives such as Supermom – a cooking competition for women across the country along with the International Celebrity Chef Sashi Cheliah; or the mentoring of aspiring female footballers from Manipur at the hands of the FCB Munich Legends Klaus Augenthaler (Auge) & Bixente Lizarazu, have been aimed towards creating a larger impact for the women community across the country. Moreover, their next event scheduled in Imphal, Manipur, will be another football tournament primarily for the North East states offering girls out there a platform to display their skills, plan a future in sports, and be able to bring about a larger social change. Häfele’s aim is to work at the grass root level to support this cause and give the best exposure to these budding women footballers so that they are ably trained to be able to represent India at an International level.
Images: https://www.dropbox.com/sh/dvkv55qxzjpn4t3/AAAD-y757SWGmNBzBkNvpMYRa?dl=0
Posted by SUJATA TAWDE at 4:36 AM