An Evening Dedicated to the Aspiring Women Achievers of India 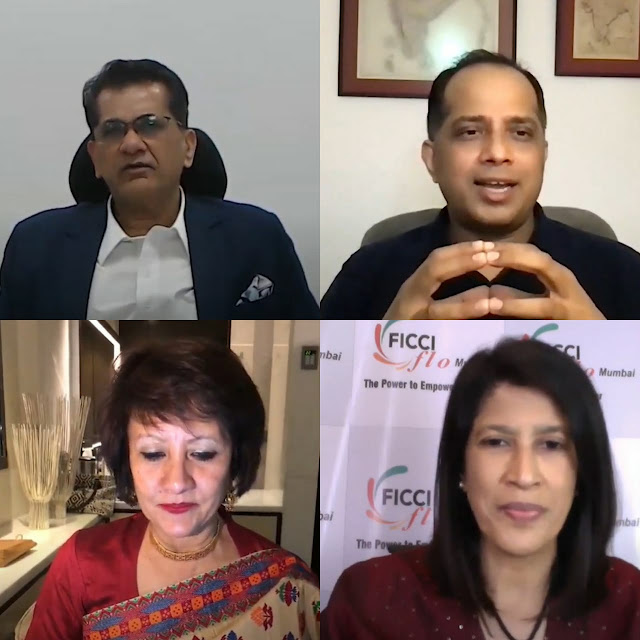 Mumbai, 13th March 2021: Ms. Kanika Kishore Dewani, CEO - Mintree Cosmetics Pvt. Ltd, Nagpur based company is the Winner of the first FLO Game Changer Award 2021 followed by Ms. Swati Pandey, Co-founder & CEO, Arboreal Bio innovations of Lucknow as the 1st Runner-up and Ms. Sonam Sodha, MD & Co-founder of Himalayan Hemp Industries Pvt Ltd, Himachal Pradesh the 2nd Runner-up of the FICCI FLO Game Changer Awards 2021. The winners were announced at a virtual award function organized by FLO Mumbai chapter yesterday. The ‘Game Changers' is a pan India competition for women-led startups, that offers women entrepreneurs a chance to get their dream project funded through an exclusive group of reputed VCs by pitching and making a conclusive case to them.

“Women-owned businesses & enterprises are playing a very prominent role in society & I firmly believe that the next big disruption within the Indian startup ecosystem will be driven by women entrepreneurs with the digital platform being the biggest enabler”, said Mr. Amitabh Kant, CEO NITI Aayog

“With this award ceremony, I am happy to release the Whitepaper on Women Entrepreneurship in India by FLO Mumbai along with SP Jain Institute of Management & Research. These researches undertaken by forums like FICCI FLO helps in working on the policies which would benefit the society at large”, he further added.

Mr. Sopnendu Mohanty, Chief Fintech Officer, Monetary Authority of Singapore said, "One of the critical segments which would make a substantial impact on Fintech's profitability is the Women's market in financial services, today it represents the World's largest & fastest growing market. Focusing on the women's market is not charity, it is an opportunity that can be worth billions & could go up to trillion dollars of revenue.”

Ms. Jahnabi Phookan, President, FICCI FLO said " The Indian Startup scenario is a buzzword in today's world & they are beginning to contribute to the growth of our Indian Economy. Women entrepreneurs can thrive economic growth in the startup scenario but for that, they need to be enabled to realize their rights".

FLO is the women’s wing of the Federation of Indian Chamber of Commerce & Industry (FICCI). FLO was established in 1983, as a division of the Federation of Indian Chambers of Commerce and Industry (FICCI) which is the apex body of industry and commerce in India. FLO has been promoting entrepreneurship and professional excellence among women through workshops, seminars, conferences, training and capacity building programmers, etc. As an All-India Organisation for women, FLO has 17 Chapters pan India - Ahmedabad, Bangalore, Bhubaneswar, Chennai, Coimbatore, Hyderabad, Indore, Jaipur, Kolkata, Lucknow, Kanpur, Ludhiana, Mumbai, Northeast, Pune, Amritsar, Northeast & Uttarakhand, with its Head Office in New Delhi.  Its members comprise entrepreneurs, professionals, and Corporate Executives.