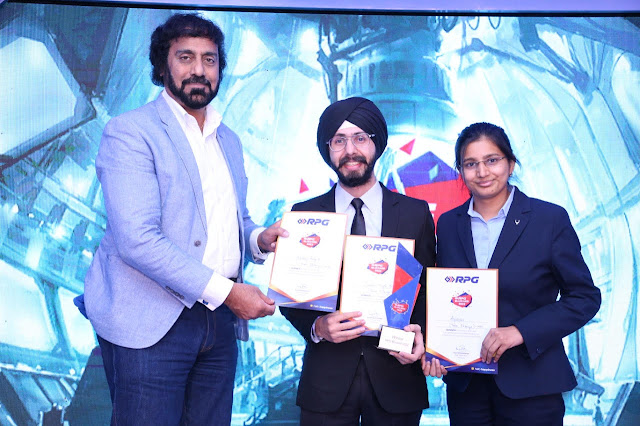 The 3000 participants from premier B schools in the country were pushed to think out-of-the-box on the theme ‘envisioning the future’.

Harsh Goenka, Chairperson - RPG Group, on the occasion said. “We are a conglomerate with single minded focus on innovation, ready to embrace tomorrow as a future-ready organization. Who better than the next Generation to lead the way? Blizzard 2022 is our platform offered to the future generation to showcase their thoughts and ideas, and it is our promise to imbibe some of these into our vision board with the commitment to implement.”

The RPG Blizzard 2022 finale asked each team to present an idea specific to each of the group companies of the conglomerate. This was a test to understand the depth and creativity of each team, with nothing text-bookish, nothing that had a ready and one stop solution. It is in the vision of the future generation that the group is truly interested and invested in, ideas that the group wants to imbibe – with the next generation truly leading the way at RPG. Some of the ideas presented were brilliant which has been included in the vision board ready for implementing soon.

S ‘Venky’ Venkatesh, Member-Group Management Board| President-Group HR at RPG said, “There are numerous competitions hosted year-on-year and hence it is but imperative that we stand out, exploring ways to make it worthwhile not just for us but also for the participants. When you seek only the best and the brightest, you do things that not only differentiates you from the rest, but also raises the bar each time. It is the vision of the youth that we are interested to see and imbibe, who might even be a part of our leadership tomorrow.”

In the initial stages to the finale the students went through various tests on a digital format. The specialty of these challenges lay in the fact that there was no standard ‘one right answer’. The 3000 participants were pushed to think differently, and they had an experience-of-a-lifetime.A total of 6 teams with 3 members each participated in the grand finale which happened in Mumbai on October 14, 2022.

In the finale round, each team was asked to present an idea specific to each of the group companies of the conglomerate. It was an ideal test to understand the depth and creativity of each team.

Talking about the victory, team MDI  Gurgaon said, “The competition needed us to think and strategies. Work out a solution for a company that is real, that’s here and now. It was a brilliant experience. More than winning, we wanted the judges to tell us if our idea is novel and one that fits the need of RPG Life Sciences. Because we knew if they like it they will implement it. This feeling is amazing.”

RPG Blizzard is the group’s campus outreach program which connects with students of premier B-Schools through various touch points. These include initiatives such as picking Brand Ambassadors from the best influencers on campus, Brand-It! - a platform for students that tests the creativity of participants and Weekend Special, a weekly quiz and a case study competition.

RPG Blizzard stands out among the various case study competitions conducted in the campuses because of our uniqueness and out-of-the-box concepts. It has sprung in surprises on the students over the last few years by conceptualising the final round on themes like the Game of Thrones and Super-Heroes of the Marvel Universe.

Using case studies as the basic premise, Blizzard puts tomorrow's leaders right in the driver's seat of the businesses. RPG Blizzard is hosted every year in premier B-Schools to engage the top brains at campuses to respond to realistic business situations.