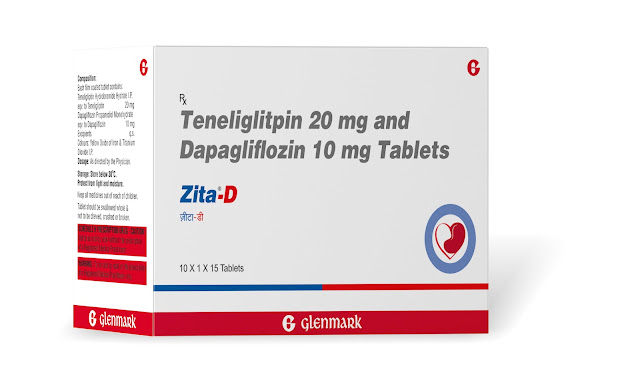 On the launch, Alok Malik, EVP & Business Head - India Formulations, Glenmark Pharmaceuticals, said, “Diabetes is growing in India at an alarming rate, and eight out of every ten diabetic patients suffer from comorbidities.Glenmark being a leader in the diabetes segment in Indiais proud to bring Zita D, a well researched and affordable fixed dose combination, which will significantly improve the glycemic control in adult patients suffering from uncontrolled Type 2 diabetes,especially the ones with comorbidities.”

Glenmark’s Leadership in the diabetes segment

Glenmark has a strong legacy of bringing new and effective treatment options fordiabetic patients.In 2015, Glenmark revolutionized diabetes treatment in India by being the first to launch the DPP4 inhibitor – Teneligliptin, followed by a fixed dose combination of Teneligliptin + Metformin. In continuation towards its legacy, Glenmark launched Remogliflozin, a novel SGLT-2 inhibitor in 2019 after its first global approval in India and subsequently launched its combinations with metformin and Vildagliptin.Earlier in 2022, Glenmark launched Sitagliptin and its FDCs, followed by Lobeglitazone.

According to IQVIA™ sales data for the 12‐month period ending Sept. 2022, the market for oral anti-diabetic drugs in India is estimated to be INR 11,796 cr. with an annual growth of 7% against the corresponding period last year (MAT Sept. 2021). As per the International Diabetes Federation (IDF), the prevalence of diabetes in India is expected to increase to 125 million by 2045i[i] Out of these, 77% of patients have uncontrolled diabetesiii. Moreover, about eight out of ten patients with diabetes also have one or more comorbidity in Indiaiv.