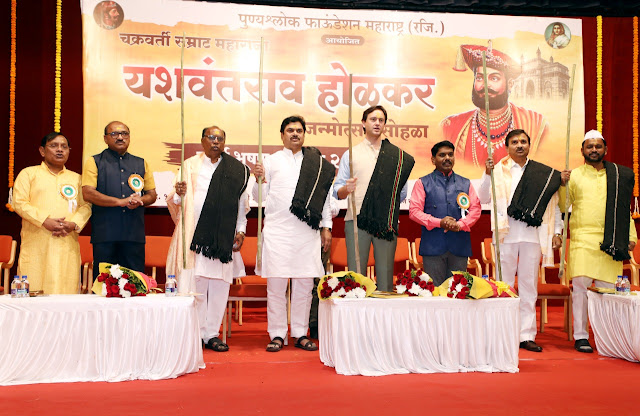 2025 is the 300th birth anniversary of Punyashlok Ahilyadevi Holkar and the central and state governments should celebrate the tricentenary year of Punyashlok Ahilyadevi Holkar with great fanfare. Dhananjaya Tanle, President of Punyashlok Foundation proposed that at least 300 different programs should be conducted in the state during this year and at least 300 crores should be allocated for this.Speaking on behalf of Representation of the House Ram Shinde assured that the government will soon put forward the said proposal and force the state government to implement it.

He was speaking at the birthday celebration of Chakraborty Emperor Maharaja Yashwantrao Holkar and the Mumbai Bhushan Award distribution ceremony organized by Punyashlok Foundation.

On this occasion, many dignitaries expressed their thoughts on the history of Maharaja Yashwantrao Holkar and the various demands of the Dhangar community.

Introduction of the program N. B. Mote did The vote of thanks was given by Ashok Patil and the coordination was expressed by Narendra Bedekar.

1. Punyashloka Ahilya Devi Holkar's descendants from father-in-law and mother for the first time in history on a platform..