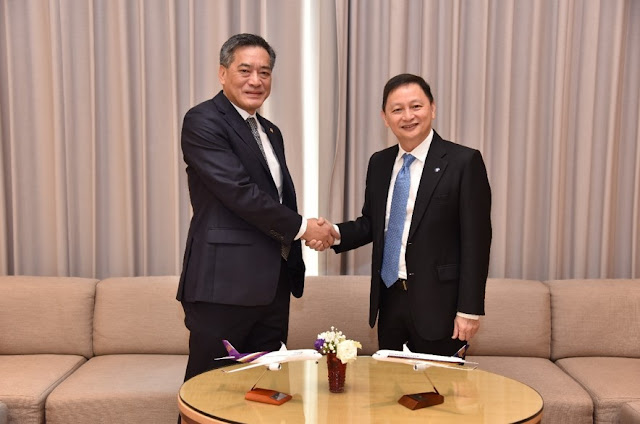 Thai Airways International Public Company Limited (THAI) and Singapore Airlines (SIA) have signed a Memorandum of Understanding (MoU) to form a new strategic partnership. This will result in the airlines progressively code sharing more extensively on each other’s services and exploring wide-ranging commercial collaboration that provides their customers with more options and value, as well as greater benefits and an enhanced travel experience.

In the initial phase, THAI and SIA will codeshare on each other’s flight services between Singapore and Bangkok. THAI will also codeshare on SIA’s flight services to Cape Town and Johannesburg in South Africa; Houston, Los Angeles, New York (John F. Kennedy International Airport and Newark Liberty International Airport), San Francisco, and Seattle in the United States of America; as well as Vancouver in Canada, by the first quarter of 2023, subject to regulatory approval.

Additional codeshare arrangements to points in both airlines’ networks will be explored to support increased air connectivity to Thailand and Singapore, as well as points in Europe, India, and South West Pacific routes.

Mr Goh Choon Phong, Chief Executive Officer, Singapore Airlines, said: “SIA and THAI have had a close relationship for many years, which we aim to strengthen through this comprehensive agreement. Both airlines have a loyal customer base, as well as extensive operations within South East Asia and around the world. This is a win-win opportunity to support the growth of our respective hubs and enhance the options and service offerings for our customers.”

Mr Suvadhana Sibunruang, THAI Acting Chief Executive Officer, said: “THAI and Singapore Airlines have shared a long-term relationship, and I am glad that this cooperation between the two airlines will certainly cater for the demand of travellers between Thailand, Singapore, and beyond. It will also enable the expansion of THAI’s network to more service points in the United States, Canada, South Africa, Europe, India, and South West Pacific routes. The codeshare arrangements will greatly benefit our customers in a range of service areas including the frequent flyer programme, customer experiences, lounge access, and airport ground services.  The collaboration strengthens both the airlines’ networks as members of Star Alliance.”

The SIA Group’s history dates back to 1947 with the maiden flight of Malayan Airways Limited. The airline was later renamed Malaysian Airways Limited and then Malaysia-Singapore Airlines (MSA). In 1972, MSA split into Singapore Airlines (SIA) and Malaysian Airline System. Initially operating a modest fleet of 10 aircraft to 22 cities in 18 countries, SIA has since grown to be a world-class international airline group that is committed to the constant enhancement of the three main pillars of its brand promise: Service Excellence, Product Leadership and Network Connectivity.

Thai Airways International Public Company Limited (THAI) is the national carrier of the Kingdom of Thailand.  Founded in 1960, it operates domestic, regional and intercontinental flights.  THAI is operating flights in 34 European, Australian and Asian routes.  Throughout the period of more than 60 years in the airline business, THAI aims to focus on safety and quality of service with for passenger comfort through the journey which have made THAI become one of the best airlines in the world guaranteed by the various awards of recognition.