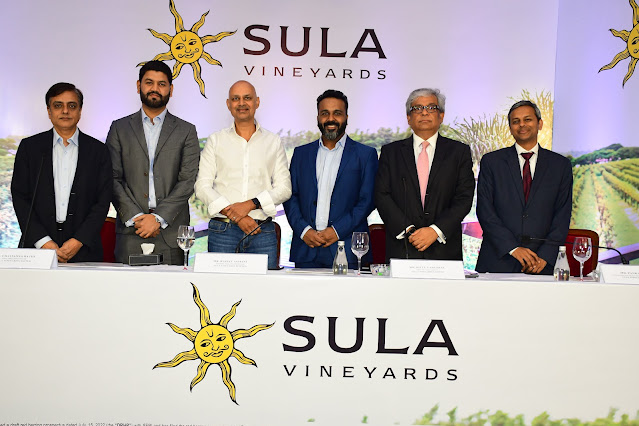 Mumbai, December 07, 2022: Sula Vineyards Limited, the country’s largest wine producer and seller and a consistent market leader in the Indian wine industry in terms of sales volume and value since Fiscal 2009 has fixed the price band at ₹340 to ₹357 per Equity Share for its maiden public offer. The initial public offering (“IPO” or “Offer”) of the Company will open on Monday, December 12, 2022, for subscription and closes on Wednesday, December 14, 2022. Investors can bid for a minimum of 42 Equity Shares and in multiples of 42 Equity Shares thereafter.

The public issue with a face value of Rs 2 per equity share is a complete offer for sale (OFS) aggregating to 26,900,530 equity shares by existing shareholders.

Sula set up its first vineyard in 1996 and in the year 2000 was the first to introduce varietal wines in India with the launch of Sauvignon Blanc, Chenin Blanc, Zinfandel, Riesling, Red Sparkling, and dessert wine offerings. In Fiscal 2005 it launched the first wine tasting room in India at its winery in Nashik, Maharashtra followed by country’s first vineyard resort in 2008, and in the same year, the wine-maker launched the first wine-themed music festival in India, “SulaFest”, at its Nashik facility in 2008. “SulaFest” has been widely recognized as the largest wine music festival in India and one of the largest wine music festivals in Asia, based on attendance. In Fiscal 2017, it launched a wine tasting room at its “Domaine Sula” facility in Karnataka.

The Mumbai-based wine maker is one of the fastest growing alcoholic beverage companies in India as of March 31, 2021 and has grown at a CAGR of 13.3% between Fiscals 2011 and 2022 according to Technopak report as mentioned in the DRHP. On the basis of total revenue from operations, it has gained market share from 33% in Fiscal 2009 in 100% grapes wine category to 52% in value in Fiscal 2022. Its business can be broadly classified under production of wine, import & distribution of wines and spirits and sale of services from ownership and operation of wine tourism venues including vineyard resorts and tasting rooms.

Sula’s Shiraz Cabernet is India’s largest selling wine by value in Fiscal 2021, with its gross billings amounting to Rs 91.83 crore in FY22. Recently it won five silvery and four bronze at the “Decanter World Wine Awards, 2022 and its Brut Tropicale won a gold medal at the International Wine Challenge 2022.

Kotak Mahindra Capital Company Limited, CLSA India Private Limited and IIFL Securities Limited are the book running lead managers and KFin Technologies Limited is the registrar to the offer. The equity shares are proposed to be listed on BSE and NSE.