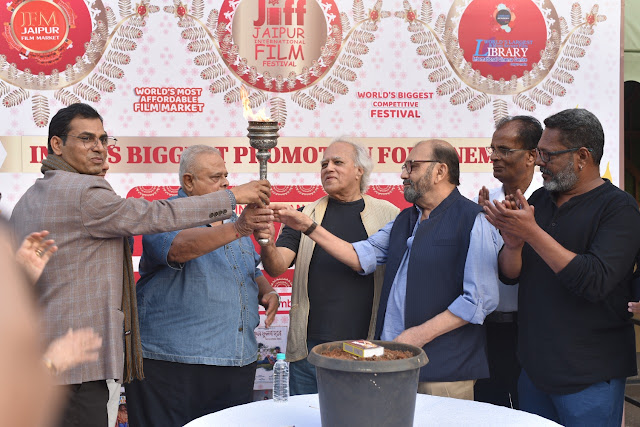 A great number of producers, filmmakers, actors, actresses and people from the film industry attended the significant event

This campaign is running in the entire country with 12 full-length films in different Indian languages, Marathi film Tath Kana is also included

Open dialogue on Indian Cinema: Today and Tomorrow is held

The trailer of the film Chalti Rahe Zindagi is launched in the graceful presence of Barkha Sengupta, Trimala Adhikari, Rohit Khandelwal, and Film director Arti Bagri

JAIPUR | Beginning from 6th to 10th January 2023, the 15th edition of Jaipur International Film Festival is running the ‘Torch Campaign’ with 12 full-length films of various Indian languages, selected in JIFF Indian Panorama that reached Mumbai on Thursday after Guwahati, Kolkata, and Chennai.

In the history of Indian cinema, the ‘Torch Campaign’ is the biggest film promotional campaign for regional cinema hitherto. This campaign is running for 12 selected films of various Indian languages of Indian Panorama, which includes the Marathi film Tath Kana directed by Girish Mohite [Mumbai] also.

Attending the campaign event, Robin Bhatt opined that JIFF Torch Campaign is a very important and essential step for Indian Cinema, which is highly required at the time.

Forth phase of the ‘Torch Campaign’ is organized in Mumbai

Forth phase of the very significant ‘Torch Campaign’ is organized at ‘The Club’ [Andheri West, Mumbai] on Thursday. Noted scriptwriters Kamlesh Pandey, Robin Bhatt, and Vinay Shukla were stars of the event, who all mentioned Jaipur International Film Festival as the world’s first film festival, where films are getting launched in different cities of the country. This innovative endeavor of JIFF will give a new identity to our regional cinema.

Kamlesh Pandey, a special guest at the event, has won Film Fare Award for script writing of the very popular film Tejab, the Star Screen Award for the film Saudagar, and the IIFA Award for the evergreen film Rang De Basanti. Pandey has earned a great name and fame in the world of script writing in his long span of work of 25 years. Pandey has been a jury member of JIFF Indian Panorama as well.

Vinay Shukla, director of the much-acclaimed film Godmother [1999] is a proficient writer also, as he has penned scripts for films like Hum Paanch, Aitbaar, Mirch, Diljala, and others.

This campaign is going to witness the participation of more than one thousand producers, filmmakers, actors, actresses, and film professionals across the country, festival founder–director Hanu Roj informs.

Festival founder–director Hanu Roj told that more than one thousand filmmakers, actors, actresses, and film professionals are going to participate in the campaign.

The trailer of the film Chalti Rahe Zindagi is launched in the graceful presence of Barkha Sengupta, Trimala Adhikari, Rohit Khandelwal, and Film director Arti Bagri.

“With the motto of promotion and global dialogue of Indian Cinema, JIFF will create Indian Cinema Fund, where well-known personalities from the film industry will be added and involved”, festival founder–director Hanu Roj asserts (in Guwahati). Agreeing with this aspect, Riniki Bhuyan Sarma stated that she would be on the board of directors as well.

Previously, on 15th November, the Torch Campaign kicked off from Guwahati. The Launching Ceremony was organized at Vivanta Taj Hotel, in a magnificent manner. Chief Guests of the Launching Ceremony were noted filmmaker and entrepreneur Riniki Bhuyan Sarma (She is married to Himanta Biswa Sarma, the Chief Minister of Assam) and Partha Sarathi Mahanta, Guwahati’s Joint Commissioner of police. Mahanta is a documentary filmmaker himself.

At the program (Kolkata), festival founder–director Hanu Roj stated that more efforts are required for Indian Cinema to be taken to the world level. For this purpose, the category of ‘The Best Foreign Film’ should be added for foreign films in National Film Awards. It would definitely help Indian Cinema to be global, and the Indian Ministry of Information and Broadcasting should pay special attention to it.

These 12 different Indian full-length films are being promoted

The selected films include the Assamese film Bokul Phulor Dore directed by Sanjeev Hazarika and Produced by Riniki Bhuyan Sarma, the Tamil film Maamanithan [The Great Man] by Seenu Ramasamy, the Malayalam film The One and The Many within by Chidambara Palaniappan L, the Bengali film #Homecoming by Soumyajit Majumdar, the Tamil film Visithiran by M Padmakumar, the Tamil film Gargi by Gautham Ramachandran, the Marathi film Taath Kana by Girish Mohite, the Tamil, the Telugu film Shadow of the Night by Radhakrishnan Parthiban, the Malayalam film Nest of Sorrows by Joshy Mathew, the Tamil film Mugizh by Kartick Swaminathan, the Malayalam film Avanovilona By Sherry and Deepesh T and the Bengali film Jhilli by Ishaan Ghose. All these films would be screened during the festival, from 6th to 10th January 2023. At the special event, all producers and directors related to these films were present.

Campaign to continue in these cities

After launching in Guwahati on 15th November, and the second phase taking place in Kolkata [18th November], the third phase will be organized in Chennai [26th November], Mumbai [1st December], Chandigarh [16th December], Rohtak [17th December], and Jodhpur [26th December]. Next to the event in Jodhpur, the torch will be handed over to the filmmakers of Delhi, who will bring it to Jaipur on 5th January.

Awarded films to be screened in 4 cities of 4 states

“After 12 films’ screening during the film festival in Jaipur, awarded films would be shown in four cities Srinagar, Trivandrum, Hyderabad, and Bangalore, and the dates for the screening would be declared in February 2023”, festival founder–director Hanu Roj informs.

“One film may receive more than one award and one film may not get any award, as each film needs to fulfill the parameters decided by Jury”, informs festival spokesperson Rajendra Boda.

The prestigious jury includes Jim Rygiel, who has won 3 Academy Awards [Oscars] and 3 BAFTAs for Best Visual Effects for the very popular film THE LORD OF THE RINGS TRILOGY.

Stephen Castor from Hollywood is on the Jury, who has partnered in business with Jim Rygiel, three-time Oscar winner for Best Visual Effects for THE LORD OF THE RINGS TRILOGY.

Marc Baschet is a big producer and cinematographer, known for No Man's Land [2001, Oscar-winning film], Before the Rain [1994] and The Adopted Son [1998] is also a Jury member, who has participated in JIFF twice.

Two Indian filmmakers have nodded to be on the Jury including renowned play writer Kamlesh Pandey, who has an enriched experience of writing of more than 30 years in the advertising world, more than 20 years in films, and 14 years in the television world. It’s interesting to know that Pandey has won the Filmfare Award for Tejaab, Star Screen Award for Saudagar, and IIFA Award for Rang De Basanti.

Shaji N Karun is an Indian film director and cinematographer, who would be the Chairperson of this jury. His debut film Piravi [1988] won the Caméra d'Or – Mention d'honneur at the 1989 Cannes Film Festival.