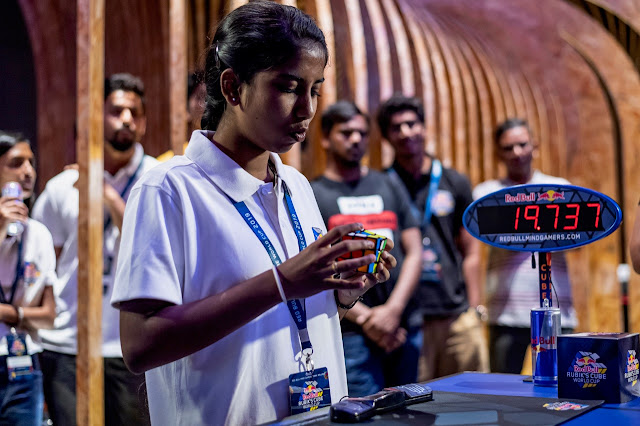 India, November 26th 2021: The world’s fastest speedcubers from across the world will put their mind skills to the test on 4th December as they go head-to-head at the epic  Red Bull Rubik’s Cube World Cup final. More than 4,200 entrants from more than 50 countries have been whittled down to 32 of the fastest solvers for the finals.

Now in its fourth year, the Red Bull Rubik’s Cube World Cup is the pinnacle event of competitive speed cubing and will see challengers from the UK, USA, France, Germany, Poland, Argentina, Canada, Germany, Russia, Hong Kong, Israel, India and Australia battle it out as they attempt to solve the infamous puzzle at lightning speed to claim the title of World Champion - challenging the athletes like no other competition in this sport. Lakshimi Rajaram, Rehaan Rasheed, Aryan Chhabra and Bhargav Narasimhan from India will represent India among 13 countries at the Red Bull Rubik’s Cube World Cup World Finals

The entirely virtual event will utilise innovative technology, including a fully digital Rubik’s Connected Cube to track the athletes turns and solves to a fraction of a second, and will be hosted in an immersive virtual world on gather.town.

Last year saw Max Park and Felix Zemdegs, stars of the acclaimed Netflix documentary The Speedcubers, go head-to-head in a nail-biting ‘speedcubing’ final, with Park taking the crown with an incredible solve of 5.9 seconds. Park will be competing to retain his title in this year's final.

In addition to the hotly contested mixed ‘speedcubing’ event, the unique format will see male and female players competing 1 versus 1 in three other competitive modes, including: ‘Fastest Hand’, ‘Speedcubing (female)’ and ‘Re-scramble’.

-        Fastest Hand: The single-handed solving event will see competitors using either their right or left hand only to complete the puzzle. This year, finalists will be hoping to beat 2020’s winning time of 11.875.

-    Speedcubing Female: The Red Bull Rubik’s Cube World Cup is the only speedcubing tournament to offer a women’s only event, with the objective of encouraging more women to take up the sport. Last year the title was claimed by France’s Juliette Sébastien - who also came second in the mixed ‘Fastest Hand’ event.

-        Re-scramble: The rescramble event is different from the regular speedcubing events in that competitors are given a solved Rubik’s Cube and need to match the pattern of a randomly scrambled Cube. With 43 quintillion possible scrambles of a Rubik’s Cube, this event is regarded as considerably trickier than a traditional solve.

Lakshimi Rajaram from Chennai won the national finals in the Speed Cubing (Female) category three times in a row. She said, “I am extremely delighted to win the National Finals three times in a row now. My hard work is paying off.  It was the second time that we competed in an online tournament format, so I was even better prepared this time around as compared to last year. I would like to thank Red Bull for supporting upcoming cubers in India with tournaments like Red Bull Rubik’s Cube World Cup, I always look forward to this tournament as it helps me compete against the best cubers in the world. Look forward to giving my best on 4th December”

The Red Bull Rubik’s Cube World Cup is a global competition designed to challenge the most accomplished speedcubers in one of the most exhilarating emerging sports. The World Cup continues to bring additional opportunities to compete with speedcubers from around the world.  All participants are aged 16 and over.

How to Solve the Rubik’s Cube:

The Rubik’s Cube is easier to solve than you might think to solve. Most players attribute their success to online tutorials and the skill can be broken down into seven simple steps - those looking to up their game can also follow a step-by-step guide here.