aha Studio and Applause Entertainment come together to unveil their first bilingual series- “Half Lion”, a biopic based on the life of Late Prime Minister Mr. P.V Narsimha Rao 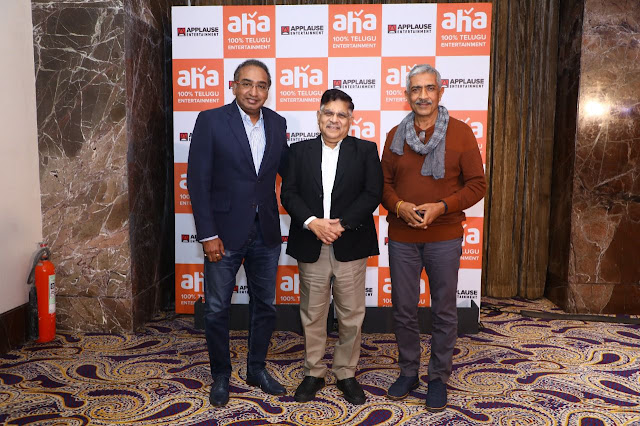 In their endeavour to reach out to a global audience, aha studio and India’s leading content studio Applause Entertainment, a venture of the Aditya Birla Group announced a partnership today to produce four premium bi-lingual Pan-Indian series. Their first offering is an adaptation of the book ‘Half Lion’ based on the life of Shri PV Narsimha Rao, former Prime Minister of India. The much-awaited announcement was made in Mumbai earlier today by Allu Aravind- Promoter aha and Managing Director Geetha Arts and Sameer Nair- CEO Applause Entertainment.

Titled ‘Half Lion’, the web series is based on the book of the same name written by “Vinay Sitapati”. The series will be helmed by National award-winning director Prakash Jha, a filmmaker known for his expertise around socio-political themes such as Gangaajal, Apaharan, Rajneeti and Aarakshan, and most recently, the award winning drama series Ashram, to name a few. Half Lion will release in Hindi, Telugu, and Tamil in 2023.

Sharing his thoughts about the newly-launched studio, Allu Aravind - Promoter, aha and Managing Director - Geetha Arts, said, “It’s been a remarkable journey with aha in Telugu so far. We are overwhelmed with the love and support we’ve received globally from the audience, who’ve made aha one of the fastest growing apps in India within a span of two years.  In what is another pioneering effort from aha, we believe aha Studio will help us work with the best creative talent in the country to present world class entertainment to our global audience. I’m proud to announce the partnership with Sameer Nair and Applause Entertainment and have the opportunity to present the story of our beloved late Prime Minister P.V Narsimha Rao to audiences across the world.

Talking about the studio and the association, Sameer Nair - CEO, of Applause Entertainment, said, “In our continued efforts to partner with the most prolific content creators across the country, we are beyond thrilled to unfold the next chapter in storytelling with aha Studio, pioneers in the Telugu industry and announce our first offering with the PV Narsimha Rao biopic. This collaboration builds on our vision of creating content without borders, and beyond languages, enabling us to tell more clutter breaking stories in future. We are glad to have a filmmaker like Prakash Jha helm this unique project and am thankful to Allu Aravind for the collaboration. This is hopefully the beginning of a rewarding partnership with aha Studio and more announcements shall follow soon."

Speaking about his association with aha Studio and Applause, Director Prakash Jha commented, “It is exciting to work on real life stories and subjects, especially with platforms like Aha who share the same vision and energy! Applause has already established its credential as a formidable content creator and that makes it even more exciting! It’s important for today's generation to know the story of those who’ve played an instrumental role in making the country what it is today, and I believe that there is a lot to learn and be inspired from the life of the great PV Narsimha Rao.”

In the short span of less than two years, no one has won the hearts of the Telugu-speaking audience like aha. The 100% Telugu streaming platform has made waves in the industry by adding more than 45 million unique users with 13+ million downloads and 1.5million active subscriptions. Having dominated the space unlike no other, aha is ready to embark on another remarkable journey with the launch of aha studio. An endeavour by aha to bring alive premium Pan India films. aha offers its 6 million active users original Telugu content across various formats that include movies, web-series, and non-fiction shows. Available at ₹399 annually, aha offers affordable viewing experience to all. aha is all set to expand in multiple languages starting with Tamil in January.

Applause Entertainment is a leading Content & IP Creation Studio with a focus on premium drama series, movies, documentaries, and animation content. A venture of the Aditya Birla Group, led by media veteran Sameer Nair, the studio has produced and released popular series across genres and languages which includes shows like Criminal Justice, Scam 1992, Hostages that have gone on to set new benchmarks. Currently in production is a robust slate of Theatrical and Direct-To-Streaming movies including Sharmajee Ki Beti, Aruvi, Iftikhar and more. Applause has partnered with leading platforms like Netflix, Disney+Hotstar, Amazon Prime Video, SonyLIV and MX Player for its creative output.