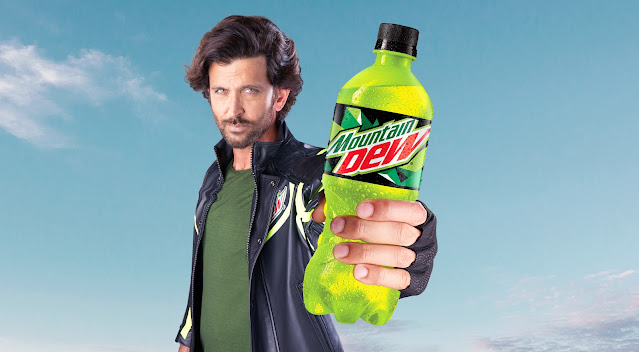 New Delhi, 20th Dec 2021: As a brand that has always celebrated the spirit of those who push themselves in the face of fear to achieve extraordinary results; Mountain Dew® is all set to inspire the youth of India to push boundaries and move beyond fear and self-doubt through its Darr Ke Aage Jeet Hai campaign this year.

The beverage brand has unveiled its new power packed TVC today featuring Bollywood superstar and brand ambassador Hrithik Roshan. Taking the excitement up a notch, the film has been shot on the top of the world’s tallest building – Emaar’s Burj Khalifa in Dubai. The TVC is a reiteration of Mountain Dew®’s belief that in the face of any challenge there are 2 choices; either succumb to fear & turn back or overcome the fear & move ahead – it is this choice that sets the real heroes apart from the rest.

Based on the powerful life insight of ‘Darr Ke Aage Jeet Hai’ the film opens to a birds-eye view shot from the top of the Burj Khalifa where Hrithik gears up to perform a daring stunt in front of a huge audience while representing India in making a world record. The film captures both the dilemma & the determination of Hrithik Roshan as he evaluates the choice in front of him. Hrithik takes a ‘himmat ka ghoonth’ (sip of Mountain Dew®), a resolute look crosses his face as he plunges off from the edge of Burj Khalifa on his bike defying all odds.

Speeding down from his bike from Burj Khalifa on a slim runway, Hrithik leaves the audience on-ground gasping with disbelief and fear as he falters and skids mid-way. However, with an unwavering spirit, Hrithik successfully makes his way to the end of the runway and emerges as a winner as audience applaud him for this jaw-dropping action.

Speaking about his experience of shooting the TVC, brand ambassador Hrithik Roshan said, “Mountain Dew’s philosophy of “Darr Ke Aage Jeet Hai” is in line with my belief that no matter who you are or where you are from, it is an individual’s courage in the face of fear that makes him/her a real hero. It was a thrilling experience to shoot this TVC on Burj Khalifa and I am confident that this adventurous film will resonate strongly with my viewers. With this campaign, we are striving to reach new heights – quite literally and hope to inspire the youth to uphold their confidence and face their fears head on.”

Vineet Sharma, Category Director- Mountain Dew & Sting, PepsiCo India said, “Mountain Dew has always saluted the spirit of risk taking and pushing boundaries to achieve success beyond fear & self-doubt. This year, the brand reiterates that real heroes are those who face challenges head-on and emerge as winners. We are confident that the ‘Darr Se Daroge Toh Kuch Bada Kaise Karoge’ narrative in our new campaign will strike a chord with the consumers and the action-packed sequence featuring Hrithik on top of the world’s tallest building – Burj Khalifa will reinstate our ‘Darr Ke Aage Jeet Hai’ philosophy.”

The Mountain Dew® TVC will be amplified across TV, digital, outdoor, and social media with a 360-degree campaign. Mountain Dew® is available in single/multi serve packs across modern and traditional retail outlets as well as on leading e-commerce platforms.

PepsiCo entered India in 1989 and has grown to become one of the largest MNC food and beverage businesses in India. PepsiCo India has been consistently investing in the country and has built an expansive beverage and snack food business supported by 63 plants across foods and beverages. PepsiCo India’s diverse portfolio includes iconic brands like Pepsi, Lay’s, Kurkure, Tropicana 100%, Gatorade and Quaker.

PepsiCo’s growth in India has been guided by our vision to Be the Global Leader in Convenient Foods and Beverages by Winning with Purpose. “Winning with Purpose” reflects our ambition to win sustainably in the marketplace and embed purpose into all aspects of the business. For more information, visit www.pepsico.com