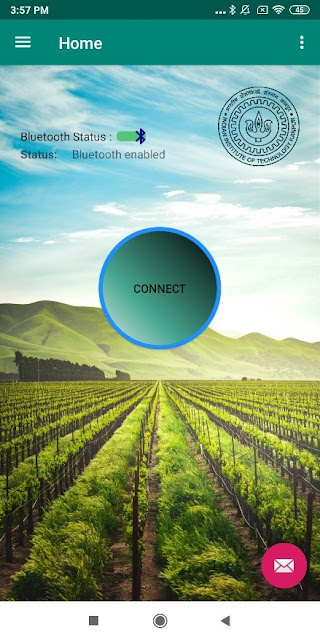 ~ The device can test upto 1 Lakh soil test samples, the highest testing capability recorded in such devices so far ~

This first-of-its-kind novel invention is based on Near Infrared Spectroscopy technology that provides real time soil analysis report on smart phones with an embedded mobile application named Bhu Parikshak available on Google Play Store. The device can detect six important soil parameters namely - Nitrogen, Phosphorus, Potassium, Organic Carbon, Clay contents, and Cation Exchange Capacity. It also recommends the required dose of fertilizers for the field and crops. The mobile application is made user friendly through the user interface which is available in local languages, such that even a class 8th pass person can easily handle the device and the mobile application. The device can test upto 1 Lakh soil test samples, which is the highest testing capability of a soil testing device among its predecessors.

Prof. Abhay Karandikar, Director, IIT Kanpur said, “Farmers are our caretakers. But they face a lot of hardships. One such hardship is getting their soil tested and wait for the results for days. That will not be a hassle anymore. I am delighted for the team from IIT Kanpur for developing such a novel device that will assist individual farmers in assessing the health of their soil in almost no time. This is another step towards achieving the goal of technology self-reliance that IIT Kanpur thrives for.”

The invention is developed by a team of inventors at IIT Kanpur, consisting of Prof. Jayant Kumar Singh from Department of Chemical Engineering, Mr. Pallav Prince, Mr. Ashar Ahmad, Mr. Yashasvi Khemani and Mohd. Aamir Khan. The idea for the invention arose from the general observation of the common problem faced by farmers, wherein a farmer has to wait upto a fortnight for getting the soil health cards from distant district soil testing laboratories, which takes a considerable workforce and time.

The portable & wireless soil testing device requires a mere 5 grams of dry soil sample for detecting macronutrients present in the soil. Once the soil is poured into the 5 cm long cylindrical shaped device, it connects itself with the mobile through Bluetooth, and starts analyzing the soil for 90 seconds. After the analysis, the results appear on the screen in the form of a soil health report, which is accessible on Bhu Parikshak cloud service with unique ID. The report also comes with a recommended dose of fertilizers.

ABOUT IIT KANPUR: Indian Institute of Technology, Kanpur, is one of the premier institutions set up by the Government of India. Registered in 1959, the institute was assisted by nine leading institutions of the U.S.A in the setting up of its academic programs and laboratories during the period 1962-72. With its record of path-breaking innovations and cutting-edge research, the institute is known the world over as a learning centre of repute in engineering, science, and several interdisciplinary areas. In addition to formal undergraduate and postgraduate courses, the institute has been active in research and development in areas of value to both industry and government. For more information, visit www.iitk.ac.in