Great contribution of chess to the society! 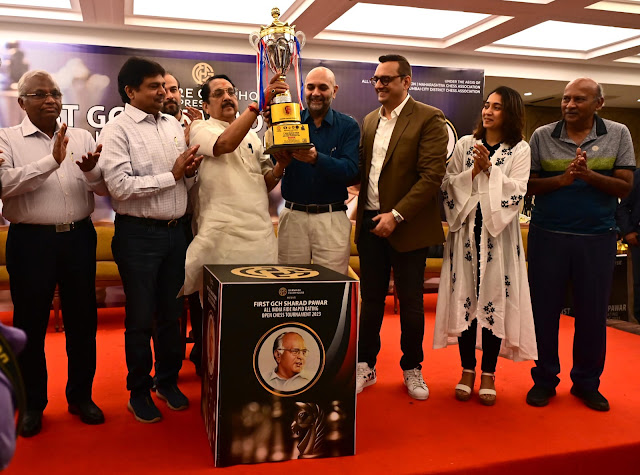 MUMBAI: Playing chess develops the intellectual capacity of children. She becomes intelligent. Chess influences your personality in any field you move into. Hence, these children will not only become chess champions, but will also earn a name as successful people in the society in the future. This is the great contribution of chess to the society, said Grandmaster Praveen Thipse.

"The National Chess Association under the leadership of Bharat Singh Chouhan has been doing great work since 2019. The Chess Olympiad held at Mahabalipuram was also successfully held. The State Government of Tamil Nadu and the Government of India gave great support to this tournament. The 'Chess in Schools' initiative of the organization is also being implemented successfully. We are teaching chess to children. A guide book has also been made available on the organization's website, which will act as a guide. We have taken many steps to promote the game," Thipse said on the occasion.

Thipse recalled the World Chess Championship held in Moscow in 1985. He said, "Garry Kasparov was asked about his world title. Then he said, 45 lakh players play Chess in my country. So it is natural that one of them should become a world champion."

Sharad Pawar has been the pillar of not only Chess but many other sports organizations for many years. He is also an ardent supporter of many sports in the state. So it is a matter of pride to have a competition named after such a person. Garware Club House has honored its president on the occasion of this tournament. A record number of nearly seven hundred players from seven states have participated in this one-day chess tournament. This competition will be awarded the highest prize money in the country. Even the organizers have kept prizes for the age group below 8, 10, 12 years. I congratulate Garware Club House for this," said Thipse.

About seven hundred entries have been received not only from Maharashtra but also from all over the country at the Garware Club House for the Sharad Pawar All India FIDE Rapid Rating Open Chess Tournament. 70 percent of these are children. This is going to be the grand chess tournament with the largest participation of chess players in the chess history of Mumbai. The winner of this prestigious competition will be felicitated with the Sharad Pawar Cup and a prize of Rs.2 lakh. Similarly, other 45 winners will also be honored. Mohit Chaturvedi, Director of Garware Club House and Chairman of Chess Committee informed that we have been working hard for the successful organization of the tournament for the last three weeks in collaboration with Maharashtra Chess Association.

“Our objective of organizing sports activities is not only to produce young sportspersons, but also to develop good personality and build individuals,” said Manish Ajmera, treasurer of Garware Club House.

“This is a step taken by the Garware Club House to promote the game of chess. Our club also organized the Torch Relay of Chess Olympiad at that time. A few years ago the club also successfully organized the GCH Maharashtra State Junior Open Chess Tournament. "The success of the first Sharad Pawar All India FIDE Rapid Rating Open Chess Tournament will be a great honor for the club," said Siddharth Mayur, Executive President, Maharashtra Chess Association.