SonyLIV brings an intriguing and intimate story from the 90s with ‘Dr. Arora- Gupt Rog Visheshagya’ from 22nd July 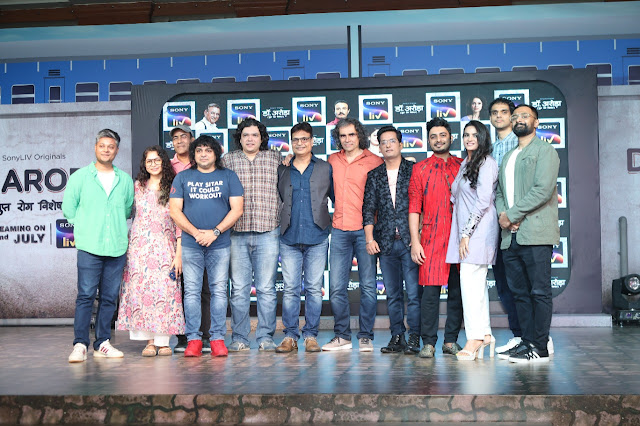 What happens when you realize you have a health condition that you dare not speak about? A condition that brings fear of ostracization rather than the support of near and dear ones? How often do you find people who can truly understand and sympathise with the situation? These questions form the crux of Imtiaz Ali’s next - Dr. Arora- Gupt Rog Visheshagya. Set to stream on SonyLIV from 22nd July, the show centres around the life and times of a sex consultant and his various patients. With poet and lyricist Irshad Kamil’s mesmerising five-song album, the show’s music infuses a hearty dose of romance and nostalgia, complementing the compelling narrative.

Set in Central India, Dr. Arora follows parallel narratives, with several characters across age, gender, and social standing coming to the protagonist - Dr Arora - who they stumble upon in their quest to find a cure to their intimate physical and psychological issues. Interestingly, Arora is not an expert in sexology by choice, but by chance. The series explores why he takes up the profession and social awkwardness about the conditions in sensitive yet humorous manner.

The show deftly covers social stigmas attached to intimacy conversations. It expertly delves into the Indian norm of tiptoeing around the issue, with each character bringing in their own quirks and drama. While it adds colour to the story, it also strikes a conversation around handling them sensitively. Directed by Sajid Ali and Archit Kumar, and produced by Mohit Choudhary, the show features Kumud Mishra, Gaurav Parajuli, Vivek Mushran, Ajitesh Gupta, Vidya Malavade, Sandeepa Dhar, and Shekhar Suman in pivotal roles.

Dr. Arora-Gupt Rog Visheshagya to stream from 22nd July only on SonyLIV

Dr Arora - Gupt Rog Visheshagya is a quirky, funny but sympathetic look towards the doctor and patients who are all dealing with a saucer full of secrets combined with the social milieu of India in the nineties. Music plays an important role in the nostalgia as well as the human feelings which the show deals in. The extremely talented Sunny and Niladri Kumar have created wonderful tracks which we are very proud to showcase. This for me is also the beginning of presenting interesting music in digital shows. I think this is an interesting step forward for us at Window Seat because no matter what the platform is, music will remain an integral part of Indian story-telling.

This is my second innings with Imtiaz and SonyLIV and it has been an absolute pleasure. Dr. Arora-Gupt Rog Visheshagya is a refreshing take on an important issue that demands more conversations around it, as that is the only way it can be normalized. That said, the real fun of doing this show for me was in its very interesting storyline, the characters, the locations, the music and the overall milieu that the story is placed in. Both the talented, young directors, Archit and Sajid have made sure that our show pushes the envelope yet remains entertaining for a larger family viewing. I'm really looking forward to the audience's response to our show.

SonyLIV is an Indian OTT platform by Sony Pictures Networks’ (SPN) providing multi-screen engagement for users on all devices. The digital streaming player is home to 24 years of rich content from the library of Sony Pictures Networks India (SPN) with over 40,000 hours of programming. SonyLIV subscribers get exclusive access to key sporting events from across the globe, the latest Hollywood Shows, Originals, 18,000+ hours of TV Shows and LiveTV.

With 100 million+ app downloads, the platform has series and movies from across Hindi, Marathi, Tamil, Malayalam and Telugu languages. SonyLIV recent originals include Tabbar, Avrodh, Your Honor season 1&2, Undekhi, Scam 1992 - The Harshad Mehta Story, Maharani, Gullak season 1, 2 &3 amongst many more.

Apart from being the official Indian streaming partner for Global Sporting events, SonyLIV keeps its viewers entertained throughout the year with Live action Cricket, Football, Tennis, Basketball, eSports, Racing and Fight Sports. The platform has been offering its subscribers a host of premium International tournaments like the UEFA Champions League, Australian Open, Bundesliga, WWE, UFC, FA Cup, UEFA Europa League, UEFA Euro 2020, Olympic Games Tokyo 2020, Impact Wrestling and The Ashes to name a few. SonyLIV also has exclusive rights to tournaments of Cricket Boards including Cricket Australia, Pakistan Cricket Board, Sri Lanka Cricket, England and Wales Cricket Board & Cricket Ireland. In 2019, the service launched in the Middle East and has plans to expand its complete bouquet of services in several Southeast Asian countries.

The Company is recognised as an employer of choice within and outside the media industry. It is a recipient of several awards, including India’s Best Companies to Work For 2021 by the Great Place to Work® Institute, India, ‘Aon Best Employers India’ awards in recognition of the company’s unique workplace culture and exceptional people practices, consistently ranking amongst India’s Top 10 Companies with Best Health & Wellness Practices by SHRM & CGP Partners and listed by Working Mother & AVTAR as one of the 100 Best Companies for Women in India.

The Company is in its 27th year of operations in India. Besides having overseas subsidiaries, it has a subsidiary MSM-Worldwide Factual Media Private Limited and an affiliate, Bangla Entertainment Private Limited in India.