Maharashtra Welcomes 2020 and the New Decade with Grandeur – ‘Dashak Maharashtrache’ 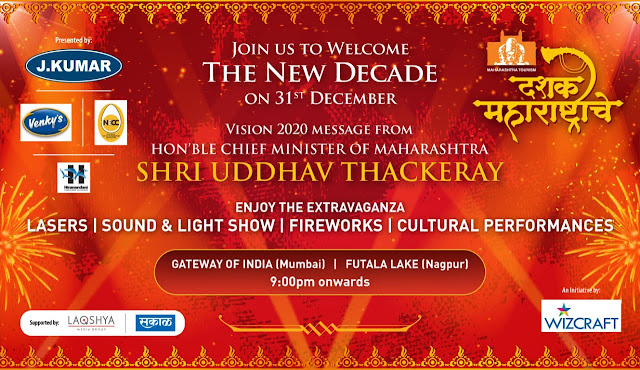 ~Showcases a sense of peace, unity and pride amongst the Maharashtrians~
~ Witness a one-of-a-kind show and Dazzling fireworks display at Iconic locations in Mumbai and Nagpur~

The Government of Maharashtra is all set to bring in the New Decade with grand celebrations across the state capitals on New Year’s Eve. Titled as ‘Dashak Maharashtrache’, the event will mark the success of the State’s continuous pace of development and usher in the new decade of hope and fulfillment of promises. Hosted by Maharashtra Tourism & Government of Maharashtra under the patronage of Hon’ble CM Shri Uddhav Thackeray, the landmark event will put India and the very own capital of Entertainment ‘Mumbai’ on the Global Map as the destination for one of the biggest New Year’s celebrations annually.

The new decade promises to be driven by rapid growth and sustainable development across all sectors in Maharashtra. Some of the recent announcements made by the Maha Vikas Aghadi government led by Thackeray, such as complete farm loan waiver, schemes to raise farm productivity, effective implementation of tribal welfare schemes in remote areas of the State, allocation of Rs 20 crore for the development of Raigad, completion of Coastal Road project and several infrastructural development projects will pave way for enhanced growth in the State.

The celebrations will comprise fireworks, lasers, cultural performances and a son-et-lumiere extravaganza. Corporate leaders such as J. Kumar Infra Projects Limited and Hiranandani group are putting their weight behind the celebration that has been initiated by Wizcraft International Entertainment. The event is sponsored by NECC and Venky’s.

On New Year’s Eve, Mumbaikars will witness the grand welcome of Year 2020 and the new Decade with exclusively curated cultural performances which will showcase the state’s festivals, music and folk dances at iconic locations Gateway of India in Mumbai and Futala Lake in Nagpur. Every location will play the video recorded message of the CM across at midnight on large screens.

‘Dashak Maharashtrache’ also kicks off celebrations of 60 years of Maharashtra in 2020.
Chief Minister of Maharashtra and the President of Shiv Sena, Shri Uddhav Thackeray said, “We are glad to celebrate the New Year with the people of Maharashtra and on this special occasion, we promise a new decade of hope, peace and prosperity in the State. We are committed to making significant strides in further developing the state in this decade and continue to work for the welfare of the common people.”
Through this grand event, the Maharashtra Government will also aim to promote the state as a tourist hotspot. An initiative of Wizcraft International Entertainment, ‘Dashak Maharashtrache’ is being supported by the Government of Maharashtra, MTDC, Maharashtra Tourism ministry, the police and municipal corporations.
Posted by SUJATA TAWDE at 5:19 AM

he Maharashtra state government has organized ‘Dashak Maharashtrache’ — an event to celebrate the new decade — at Juhu beach, Worli sea face and the Gateway of India on December 31.
you can watch it [url=https://cinemahd.tech/]cinema HD[/url] app.