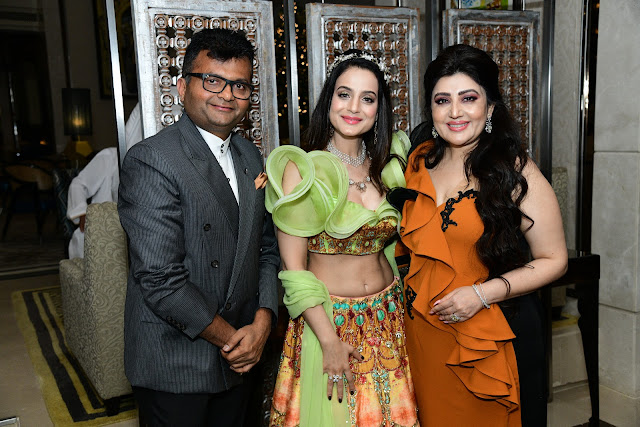 Dr. Aneel Kashi Murarka – Industrialist and Founder of Ample Missiion and renowned fashion designer Ms. Archana Kochhar’s love for fashion has come together and created a fashion show – a fundraising cause for the awareness around Parkinson’s disease qns uts increasing number or cases globally.

Bollywood Actress Ameesha Patel came forward and supported the noble cause by walking the ramp as a show stopper for the fashion show along with the patients who performed a special dance.

Commenting on the same Dr. Aneel Kashi Murarka said “People say ignorance is bliss but many a times this ignorance takes away a precious life. It is time when life threatening diseases like Parkinson should be well addressed in public. The symptoms of the disease are very trivial and often is given a pass as a small pain which further results in person being totally immobile and bed ridden and it was time action is taken as a first step towards the same.”

Actor Ameesha Patel who is known for her movies like "Gadar ek prem Katha" and "Kaho naa pyaar hai" is known for always rendering her support to such noble causes. When asked about her thoughts she said, "We human beings are always busy taking care of our family, business, jobs but in the process neglect our health, which should actually be our first priority, Parkinson is a disease that creates bigger damage only because of it been neglected at its initial stage. Today I along with Archana and Aneel Murarka ji of Ample Missiion want to spread the much required awareness about the life threatening disease and want people to take notice of the same.” Echoing Ameesha’s philosophy, Designer Archana Kochchar said, “Fashion and Bollywood connect very well with millions of people and crating such an amalgamation of both and speeding a word is a first step we took and expect all to do their bit.

Ample Mission is a Social awareness organization founded by Dr .Aneel Kashi Murarka, where they believe in creating a change in society through direct action and awareness campaigns. They organize award ceremonies to recognise brave hearts who have made a difference in the society through their work and actions. Their esteemed awardees may be common men and women who have exhibited extra-ordinary acts of courage and bravery, policemen, firefighters, army personnel and specially-abled individuals who have achieved profound success in their respective fields.

Ample Mission is also involved in various social upliftment programmes which include Educational initiatives like MUSKAAN a Slum children weekly coaching, Tribal upliftment activities ranging from medical care to employment creation, Talent hunt camps TRIBALYMPICS for tribal kids all round redevelopment is popular among the Adivasi. Ample also conduct’s hunger elimination for urban poor with MEALS FROM MAA, free distribution of meals to homeless. Ample Mission is committed to giving a new start to marginal communities like Transgender and Acid Attack Survivors with unique initiatives for their inclusiveness by providing them equal opportunities and platforms to showcase their talent to move forward and be part of the mainstream society.
Posted by SUJATA TAWDE at 3:58 AM