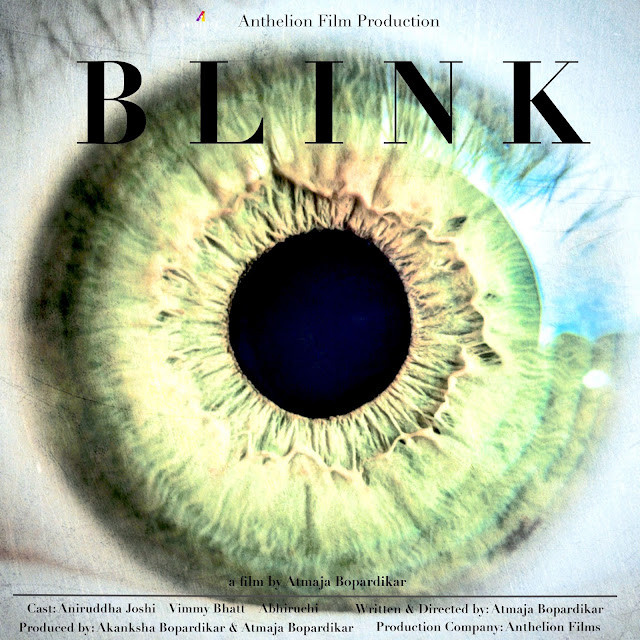 Anthelion Films a reputed production house which deals into several short films, music videos, both in India and the UK. The upcoming film Blink is a sci-fi short film that delves into the life of Neeraj who is unable to understand what is happening in his life. And one day he finds out it’s not him but his Shifting Realities.
Film Summary:

Blink is a short film about shifting realities and what would happen if those realities started colliding into each other. It centers around the protagonist Neeraj who travels between his two worlds. His wife, unable to understand what he is going through, is starting to lose her patience with him. She thinks he is going mad. But the problem isn’t him, it is his shifting realities. Neeraj’s character is played by Aniruddha Joshi and Smriti are played by Vimmy Bhatt. The little girl in the film is Abhiruchi. Directed by Atmaja B & Produced by Akanksha, Blink is 15 mins short science-fi thriller that leaves the viewer shocked and mystified.

The idea behind the story is to explore the possibility of what would happen if we could experience parallel worlds/realities in one lifetime.

This film is India’s first and one and only entry into a cult science fiction on an international Level. There are hardly any Indian film directors in India who have attempted to make anything in the subject of science fiction. Ours is the first film to make to this stage. The film has been officially selected at the Philip K Dick International Science Fiction Film Festival.

Akanksha Bopardikar is an Indian short film producer. Prior to her film-making journey, she worked in her family business which aided her to take the first step as an independent producer. Her first film “Until Death”, received a very good response in India and is currently in distribution in France. Apart from films, she has worked on music videos and commercial videos.

Atmaja Bopardikar is an Indian writer and film director. She has worked on several short films, music videos, both in India and the UK. After finishing her postgraduation in films from the UK, she briefly worked with an advertising agency in Mumbai before starting out as an independent filmmaker. Her films explore the complexities of human nature and the intricacies of the relationship between people.