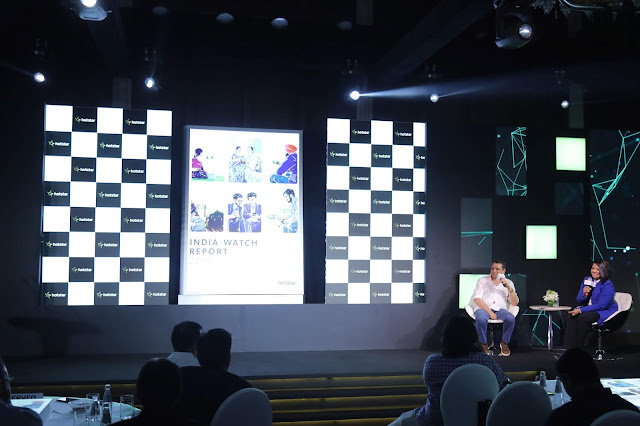 Speaking about the report, Varun Narang, EVP & Chief Product Officer, Hotstar, said, “The accelerated growth of the Indian video entertainment ecosystem has had an unprecedented impact on the consumer. Today, the Indian consumer enjoys a plethora of content to choose from, has moved beyond metro cities, and isn’t limited by gender or language. More importantly, this growing accessibility has opened doors to new thoughts and ideas that are shaping a stereotype-defying consumer.

Hotstar, with its tremendous scale and reach across the country, is well-positioned to better understand this evolving consumer, and this third edition of India Watch Report does just that. With a comprehensive look at how video streaming is evolving and the fascinating behavioral and entertainment consumption insights behind it, we’re sure the India Watch Report 2019 will make for a very interesting read.”
Hotstar, with 400 Mn+ downloads, is one of the most downloaded apps in India, registering 2X installs and 3X growth in consumption this year as compared to 2018. This growth catalyses from Hotstar's endeavors in taking digital video consumption to new frontiers, where non-metros are outstripping metros in terms of video consumption and regional content has grown to account for 40% of overall content consumption.
Propelled by this, a new generation of users are emerging who are embracing their individuality and cutting across age-old geographical, linguistic, and gender stereotypes. In 2019, men showed as high affinity to family drama as women with more than 40% viewers of family drama being men, breaking the long-held belief that such genres don't appeal to men. Meanwhile, women are also consuming more of their entertainment digitally, making up 45% of the total entertainment consumption online.
Consumers today want a voice of their own, and the opportunity to interact with others and express themselves. As a result, online viewing is transitioning from a passive experience into an immersive and social one. During VIVO IPL 2019, 64 million viewers participated in Watch ‘N Play, twice as many as last year.
It is on the back of these insights and innovative marketing solutions, that Hotstar has emerged as the preferred choice by marketers to build interesting narratives around their brands.
Combining insightful data with entertaining facts, India Watch Report 2019 details the trends shaping the Indian video streaming world.

Launched in early 2015, Hotstar’s  mobile app has notched 400 Mn+ downloads, making it one of the most in-demand apps in India. Hotstar has secured top spots on the Google Play Store as well as the Apple App Store and has consistently featured among the top-ranked apps on both platforms since its launch. The app’s success reflects its highly evolved video streaming technology as well as the quality of experience across devices and platforms.
Posted by SUJATA TAWDE at 5:08 AM