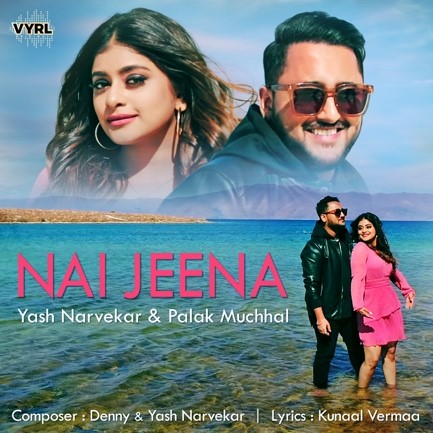 Yash Narvekar with his charming voice brings to you his latest love song ‘Nai Jeena’ in collaboration with the very talented Palak Muchhal under VYRL Originals. After a smasher dance track earlier this year, Yash is all set to mesmerize his fans and make them plunge in love with his flamboyant appearance in the video along with the digital heartthrob Anam Darbar who makes her music video debut.

Yash Narvekar, after being able to showcase his versatility in the Bollywood industry by lending his voice in movies like ‘Marjaavaan’, ‘Half Girlfriend’, ‘Noor’ and many more, curates this romantic and esteeming song with Palak Muchhal, a highly acclaimed and ravishing playback singer who has attained extensive fame at a very young age and has been known for hits such as ‘Prem Ratan Dhan Payo’, ‘Kaun Tujhe’, Teri Meri Kahani’, ‘Chahun Main Ya Naa’ and many more.

‘Nai Jeena’, a romantic and passionate song, that smoothly blends in the most sought-after Punjabi folk, transitions into a modern new age single. The track, beautifully written by Kunaal Vermaa, composed by Denny and Yash and supervised by Amaal Malik highlights the sentiment of yearning for your loved one and will definitely take you on a love ride.

The video of the song is filmed by Director JOT in the alluring locations of Armenia. The entire concept of the video revolves around “serendipity”, involving two strangers who bump into each other accidently time and again as if it were an indication from the universe. Their fate and conviction unite them together every now and then resulting in what is meant to be.

Speaking about his new release, Yash Narvekar shares, “Nai Jeena is a track that’s very close to my heart. We have worked really hard to create a balance between urban sound of today and have yet managed to keep the folk vibe in the track intact. I have always been a big fan of Palak’s work and I believe she is one of the best tones we have in the country today and having her voice in this track has definitely taken it to the next level. VYRL has been a vital part in my growth as an artist and undoubtedly it’s the best platform for any artist as they guide you in the right direction in this competitive music scene that exists today. They have indeed uplifted the category of non-film music in India and have given musicians a 360 exposure which they deserve”.

Speaking about Nai Jeena, Palak Muchhal shares, “It’s the vibe of the song that excited me to come on board! Amaal had called to brief me about the song first... he sent me the song and asked me if I would sing it... I instantly said yes after listening to the song. Yash is a fabulous singer and his voice has done complete justice to the melody! This is the first time I’m working with VYRL Originals and the experience has been quite elating! It’s wonderful how VYRL Originals has started a revolution of non-film music in India!”

Speaking about the new release, Vinit Thakkar, Senior Vice President, Universal Music India & South Asia, shares, “ Yash Narvekar is an immensely talented artist and has been with us since the inception of VYRL Originals. Nai Jeena is a wonderful track that blends folk and urban beats and we are delighted to have a talented artist like Palak Muchhal for this song.”