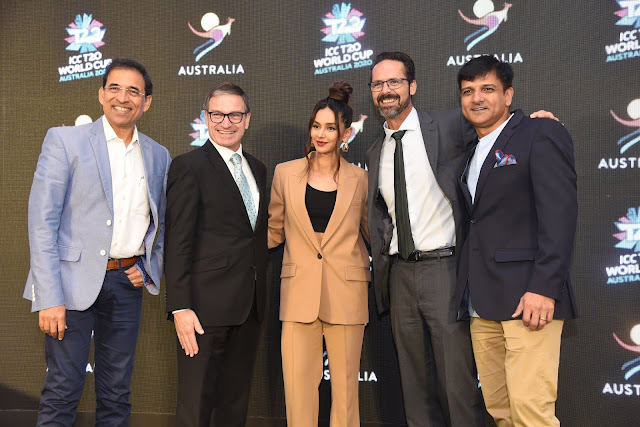 Australia, host nation of the ICC T20 World Cups, has unveiled its latest India focused tourism campaign. In the run up to the next major global event in cricket, Tourism Australia’s call to ‘Experience the game and beyond’ is targeted at passionate Indian cricket fans, offering them a combined experience of world-class cricket and an unparalleled holiday experience. Following the phenomenal success of the ICC Cricket World Cup 2015, which was co-hosted by Australia and saw approximately 100,000 international visitors, this campaign is aimed at attracting a record number of visitors for the twin World Cups.

Conceptualised by Scarecrow M&C Saatchi, the core idea of the campaign is to draw synergies between India’s most loved sport and signature Australian experiences that define the legendary ‘Australian way of life’, which includes food and drink, nature and wildlife, and aquatic and coastal experiences.

A new television and digital commercial has been produced by Infinity Squared Pvt. Ltd. as part of the campaign that features voiceovers from renowned Indian cricket commentator and Friend of Australia ambassador Harsha Bhogle; Indian singer, actress and anchor Shibani Dandekar; and Australian former cricketer Brett Lee. The trio are heard commentating on what seems at first to be a cricket match but is in fact a beautiful showcase of Australia, with the footage taking the viewer on a journey to some of our country’s most iconic destinations.

The entire campaign will run across three stages, namely, Awareness, Consideration and Booking that is eventually intended to drive visitation to Australia during 2020 and beyond. In addition to the commercial, the campaign will also leverage multiple digital mediums to amplify communications. A mix of search, display, video, social, native, programmatic and content will be a part of the digital campaign. Content partnerships with broadcast and OTT platforms will also be leveraged as part of the campaign to showcase the destination through iconic cricketers from both countries like India’s Mithali Raj and Australia’s Brett Lee. The campaign will be amplified during the Australia tour of India in 2020 and the Australian Open 2020, as well as through public relations and international media hosting programs that will see influencers from different fields have a first-hand experience of the game and beyond.

Australia’s Minister for Tourism, Senator the Hon Simon Birmingham recently announced additional funding of A$ 5 million for Tourism Australia to promote the upcoming ICC T20 Cricket World Cup to fans in India, with the aim of driving visitation to both the women’s and men’s tournaments as well as increasing Australia’s broader destination appeal in India.

The women’s tournament will kick off on Friday 21 February when Australia take on India at Sydney Showground Stadium, with the final to be held on Sunday 8 March – International Women’s Day – at the Melbourne Cricket Ground. The women’s tournament presents an unparalleled opportunity to raise the profile of women’s sport as endorsed by ICC’s vision to set a new world record for the highest attendance at a women’s sporting fixture at the finals of the T20 World Cup on Sunday 8 March 2020, International Women’s Day.

The men’s tournament will run from 18 October to 15 November 2020, with the 45 matches expected to be broadcast to two billion people.

India is currently the fastest growing inbound market for Tourism Australia with five consecutive years of double-digit growth. The 2020 arrivals goal of 300,000 Indian visitors was achieved in December 2017, three years ahead of target date.

Brent Anderson, Regional General Manager, South and South East Asia, Tourism Australia
“Australia and India have a strong bond through their shared love for cricket. While we have been witnessing impressive growth in terms of visitors and spend from India, the upcoming T20 World Cup provides us with a massive opportunity to take this to the next level. We look forward to welcoming our guests from India for an unforgettable cricket experience at our iconic stadiums and also giving them a flavour of our truly distinct way of life. As part of our plan to make this one of the largest sporting spectacles in the world, a range of offerings and packages are being introduced for travellers from India in partnership with the ICC, Official Ticketing Agents and our Key Distribution Partners.”

Nick Hockley, Chief Executive Officer, ICC T20 World Cup 2020
“The ICC T20 World Cup is Australia’s next major sporting event and the world’s next major cricket event. We look forward to welcoming fans from around the world for two spectacular T20 World Cups in 2020, with 68 matches spread across eight Australian Host Cities and 13 venues. Visiting fans can expect to see the world’s best cricketers and spectacular action on the field as well as all that Australia has to offer off the field. Thank you to the Australian Government for their strong support and congratulations to Tourism Australia for producing a terrific campaign. We encourage fans to book early and plan a great experience in Australia for the T20 World Cup in 2020!”

Harsha Bhogle, Friend of Australia and Indian Cricket Commentator
“What Australia delivers in its world class stadiums for a cricket lover is matched superbly by what it brings outside of it for a traveller. There has always been an aura attached to cricket from Australia but as I have seen in my travels across most of this beautiful country, there is a lot to enjoy in its scenic beauty, fresh produce and unique wildlife. It is a great feat for Australia to be hosting the two ICC T20 World Cup tournaments, especially the opportunity of a creating a turning point in women’s cricket, with the vision to create a world record for highest attendance at a women’s sporting fixture at the Melbourne Cricket Ground during the finals of the women’s world cup on March 8. Happy to be playing a part in promoting the T20 tournament and Australia as a destination through this campaign.”

Shibani Dandekar, Indian Singer, Actress and Anchor
“It doesn’t get bigger than a world cup in cricket and I am glad to be a part of this effort to draw attention to the women’s game as it so rightly deserves. A sporting event of this magnitude is a fantastic and powerful opportunity for us to alter the course of women’s sport and cricket in the right direction and I hope we can all come together to make a difference. Australia’s iconic travel experiences and the cheerful nature of us Australians is what makes this place so special! We have a love for the great outdoors and a healthy lifestyle. Experiencing this amazing combination of people and place is an absolute must-do and I strongly recommend a visit to Australia, what better than timing it with all the cricket action!”

Brett Lee, Former Australian Cricketer
I am delighted that Australia is the host nation for the ICC T20 Cricket World Cup for women and men next year and it really is a perfect opportunity for cricket lovers from India to visit not just the games but also to travel and experience some of our best tourism attractions. As always, when Australia hosts world class sporting events, the cities come alive with a great vibe and it is the experience of a lifetime to be a part of that celebration. Specifically, I am really excited at the opportunity that we all have to shine the spotlight on the women's tournament. Let's celebrate this festival of cricket together, and come join us in Australia to experience the game and our beautiful country.

Manish Bhatt, Founder Director, Scarecrow M&C Saatchi
“Commentary has always been an extremely popular connect between a cricket fan and the game since the radio match telecast days. There are three things common between India and Australia – Cricket, Cricket & Cricket. So we decided to give this insight a creative twist by juxtaposing cricket commentary with Australian experiences. And what better way to do it than by garnishing this idea with three great personalities – Harsha Bhogle, Brett Lee and Shibani Dandekar.”

About Tourism Australia
Tourism Australia is the Australian Government agency responsible for promoting Australia internationally as a world-class destination for business and leisure travel. Tourism Australia’s purpose is to increase the economic benefits of tourism to Australia, supporting the industry’s Tourism 2020 strategy, which aims to grow the overnight annual expenditure generated by tourism to more than A$ 115 billion annually by 2020.

The organization is active in around 15 key markets, where it aims to grow demand for the destination’s tourism experiences by promoting the unique attributes which will entice people to visit. Tourism Australia’s activities include social and digital media, traditional advertising, public relations and media programs, trade shows and programs for the tourism industry, consumer promotions, online communications and consumer research.

To book your holiday to Australia, visit www.australia.com/explore
Posted by SUJATA TAWDE at 4:57 AM