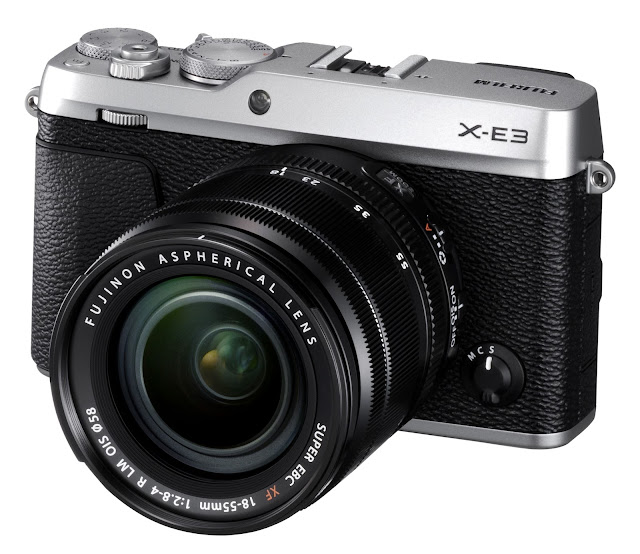 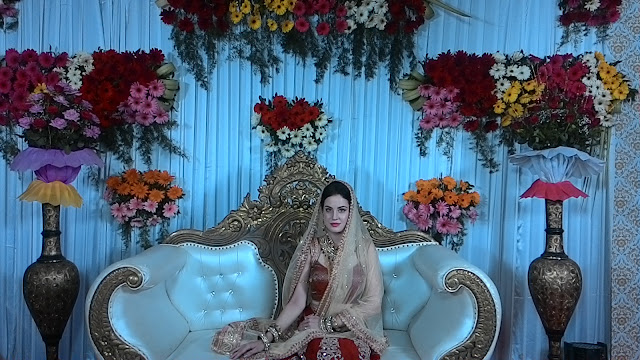 The XE 3 is equipped with the X-Processor Pro for best in class color reproduction in both stills and 4K movies. The XE 3 is made for photographers who want to seamlessly upload photos directly to their smartphone or tablet.

Fujifilm India Private Limited, a leader in a broad spectrum of imaging technologies, today announced the launch of the FUJIFILM X-E3, the latest addition to the X Series range of premium mirror less digital cameras. 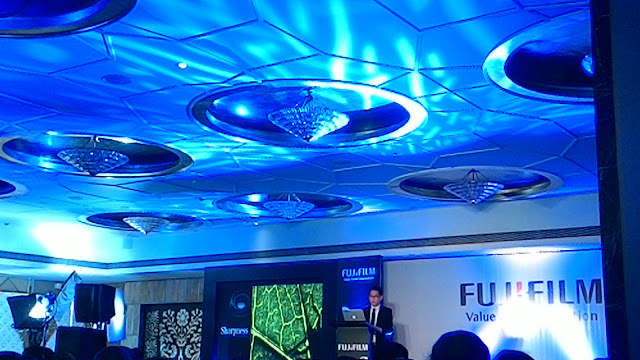 The X-E3 features APS-C 24.3 megapixel X-Trans™* CMOS III sensor and the X-Processor Pro high-speed image processing engine. The X-E3 is the first X Series model to feature Bluetooth ®** low energy wireless communication. You can pair the camera with your smartphone or tablet device for easy transfer of pictures taken. The LCD monitor, on the back of the camera, uses a static touchscreen panel which supports the conventional “Touch Shot”, “Touch AF” and “Focus Area Selection” capabilities. An all-new “Touch Function” feature is available on the X-E3, which enables gesture control like flick and pinch zoom, to further enhance touchscreen operation. The AF algorithm has been updated to enhance the camera's performance for tracking a moving subject. The X-E3's premium exterior design, agility and functional beauty make it a mirrorless camera that is “a pleasure to own and fun to shoot with” at the same time. It is available in Black & Silver colors and is priced at Rs.70,999/- (Body only), XE3 with 18-55 kit is priced at ₨.102,999/- and XE-3 with 23mm F2 kit is priced at ₨.89,999/-.

The Mirrorless Camera Market has a 25% Market Share in the Global Camera Market which is currently dominated by DSLR Cameras. The situation however is expected to change as the demand for DSLR is expected to decline and mirror-less is expected to exceed DSLR market within 3 years.
Fujifilm Group aims to capture No.1 market share in the premium mirrorless camera market by 2019, promoting the X Series that continues to evolve with outstanding image quality, fast speed and mobility and the launch of the FUJIFILM X-E3 is in line with the Company’s plans.

Commenting on the occasion, Mr. Yasunobu Nishiyama, Managing Director, Fujifilm India Pvt. Ltd. said, “The X series was first introduced in March 2011 and is now the most widely accepted mirrorless camera among photographers across the world.  In India too, we see much potential in the Mirrorless Camera Segment due to the rise in professional photography, increase in Wedding Photography and Commercial Photography for Brand communication and advertisements and increased use of Social Media to showcase ones work,. The advantage of an X Series mirrorless camera lies in its compact size packed with cutting edge innovative technology and unique features that provide great controls along with excellent color reproduction and image quality. Our latest offering - FUJIFILM X-E3 is built from the essence of minimalism and has been refined to maximize functional performance to its utmost limit. Our endeavor will always be to continuously delight our customers by launching exciting new X Series line up in the coming years as well.” 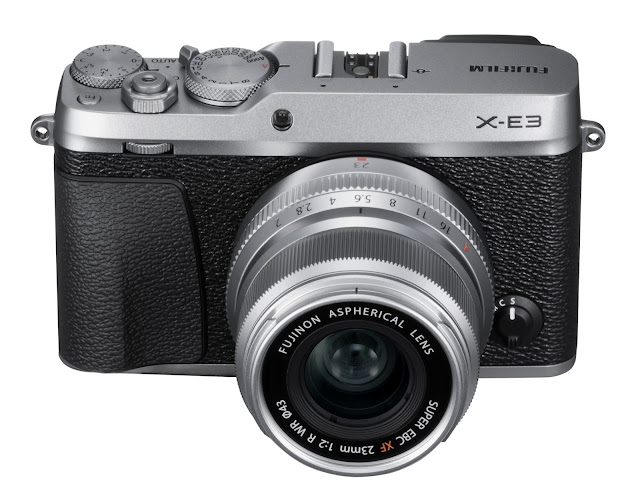 Key feature of the FUJIFILM X-E3

[1] Compact and lightweight body for portability and practicality

Fujifilm redesigned the camera body of FUJIFILM X-E2 (hereinafter “X-E2”), released in November 2013, to create the most compact and lightweight model within the X Series interchangeable lens camera range, with a viewfinder. The form factor makes it a perfect companion for everyday use and travel photography. The well-balanced proportions and the grip-shaped design make the camera comfortable to hold. The new model also supports the Focus Lever, a popular feature first introduced in the FUJIFILM X-Pro2 (hereinafter “X-Pro2”), allowing you to instantaneously change the focus area while keeping eye on the viewfinder.
The top plate of the camera body features two dials, one for shutter speed and the other for exposure compensation. The dials, milled from aluminum, have a high quality appearance and deliver a reassuring click at every notched setting. The exposure compensation dial now has the C position to enable exposure compensation of up to ±5 stops in 1/3 steps, which enhances the basic operability of photography. The X-E3 is also equipped with an Auto mode selector lever for selecting the fully-automatic Advanced SR Auto mode where the camera chooses the optimum settings for a given scene.

The X-E3 features a 24.3 megapixel APS-C sized X-TransTM CMOS III sensor and X-Processor Pro image processing engine for outstanding image quality and high-speed response. The X-E3 features a large phase detection AF area and an updated algorithm to deliver a fastest AF speed of 0.06sec.***3. The X-E3 also offers 5.0fps live-view shooting, a quick start-up time of 0.4sec., a shutter time lag of 0.050sec. and a shooting interval of 0.25sec.*4
Thanks to the newly developed image recognition algorithm, the X-E3 is able to track moving subjects twice as fast as previous models*5. In addition, the X-E3 is also able to track moving subjects of half the size as before.

・Focus Area Selection: Move the focus point to the chosen position by tapping the LCD monitor.
・Touch Shot: Touch to focus on a specific point, then take the picture.
Playback Modes
・Swipe Movement: Swiping a finger across the screen scrolls through the images, one after the other.
・Double-Tap Enlargement: Tapping the screen twice will enlarge the image, centering on the active focus point when the image was taken.
・Drag: Moving a finger across the screen when an image is enlarged will move it around the frame.
・Pinch out: Placing two fingers on the screen and widening the distance between them enlarges the image.
・Pinch in: While the image being displayed is enlarged, placing two fingers on the screen and narrowing the distance between them reduces the image size and displays the last 9 images.
・All the touchscreen functions are disabled when the “Touch Panel Settings” are turned off.
The camera also features the “Touch Function”, in which you can use flick motions in up – down and right – left directions to call pre-assigned functions. Use the drag motion on the touchscreen panel, even while keeping your eye on the EVF, to change the focus area location. In the EVF TOUCH SCREEN AREA SETTINGS, you can activate touchscreen operation for “ALL”, “RIGHT”, “LEFT” or turn the functionality “OFF”.

The X-E3 is capable of recording both Full HD and 4K video using the X Series’ famous Film Simulation modes. You can output recorded video to an external monitor, via the HDMI port, and input audio from an external microphone. 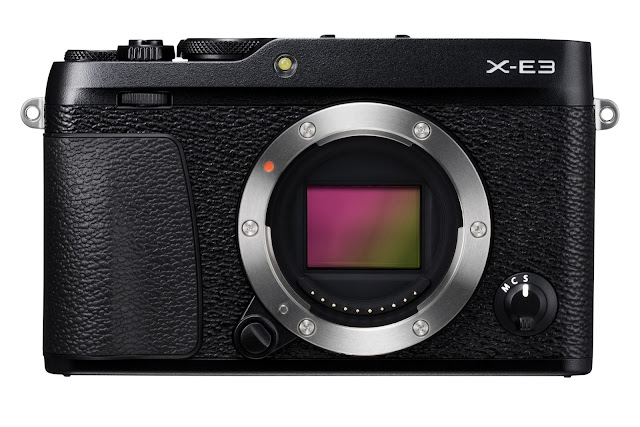 ※1 The Bluetooth® word mark and logos are registered trademarks owned by the Bluetooth SIG, Inc. and any use of such marks by FUJIFILM Corporation is under license.
※2 X-Trans is FUJIFILM’s trademark and registered trademark.
※3 FUJIFILM research based on CIPA guidelines using the X-E3 and FUJINON XF16-55mmF2.8 R LM WR lens.
※4 MF mode
※5 FUJIFILM X Series digital camera models with X-TransTM CMOS III sensor and X-Processor Pro as of September, 2017.

Fujifilm established in 1934 has believed in Innovation and creation of new values through leading edge and proprietary technologies. FUJIFILM India as a firm believer in sophistication continues to work hard to provide the Indian consumer the best products and services. Their corporate slogan is “Value from Innovation.”
Along with expressing Fujifilm's commitment to continuously creating innovative technologies, products and services that empower the potential and expand the horizons of tomorrow's businesses and lifestyles, the slogan also encapsulates the company's desire to combine our own original technology with human resources, expertise and technology from around the world both internally and externally to create innovation. A new brand statement has also been created to articulate these commitments more specifically, and the slogan encapsulates the main points of the brand statement.


Our Goal is to be a company that is able to resolve a diverse variety of the problems that face society, contribute to the world through the continuous creation of value – added products and services, and achieve sustainable growth through constant innovation. That was the commitment we made to the world when we launched our new corporate slogan “Value from Innovation”. We quickly ascertain customer needs, and communicate these clearly and accurately to those involved in product development. Instant camera – instax is successful example of this in Photo Imaging business which was developed after accurately assessing market demands and with all related business divisions working together throughout the entire process from production to sales on a worldwide scale.
Posted by SUJATA TAWDE at 8:02 AM

Sujata - Thanks for sharing info rich post. Did you get a chance to use the camera? Please do share some photographs and your verdict in terms of value for money. I have been thinking a lot for having a mirrorless as secondary camera . This info would certainly help me decide.

Hi Vijay, Thanks for appreciation. The bloggers got few minutes to use the camera at the venue. I will message the PR's contact to you. I am sure they will be happy to courier the review unit to a Esteemed / Talented blogger like you.

Camera Screen determination is constantly one central point to consider when making your buy. This quality camera monitor will offer you a bigger screen determination of around 1280 x 800; thus quality recordings. It is perfect for open air exercises since it accompanies an intense and rechargeable battery to offer you a long run time. If you want to know more, Please check out here: DSLR Camera Monitor