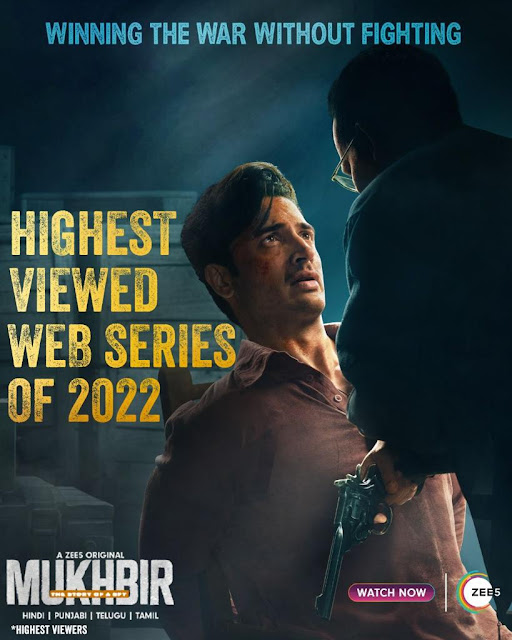 National, 25th November 2022: ZEE5, India’s largest home-grown video streaming platform, premiered the gripping spy thriller ‘Mukhbir – The story of a spy’ on 11th Nov 2022 and ever since its release, the buzz around the show hasn’t died down. So much so that within two weeks of the premiere, the show went on to become the most watched web-series on ZEE5 with 1.8mn unique viewers (all languages), 17mn + views and 300mn+ viewing minutes. From the lead actor Zain Khan Durrani’s acting chops to director-duo Shivam Nair and Jayprad Desai’s direction skills, the show has received flying reviews from critics and fans alike.

The 8-episode series also stars Prakash Raj, Adil Hussain, Barkha Bisht, Zoya Afroz, Harsh Chhaya, Satyadeep Mishra in pivotal roles. Produced by Victor Tango Entertainment, Mukhbir – The Story of a Spy is an inspiring story of India’s secret agent in Pakistan who rose to the occasion to save the nation and turn the tide of the war in his country’s favour. The series is a tribute to those unsung heroes who live in the shadows and give their life for the safety of the country.

Actor, Zain Khan Durrani said, "I am overwhelmed with all the love coming my way. Mukhbir – The Story of a Spy emerges as the real asset, and I could not have been prouder of this achievement as I have seen myself evolve with the show. Playing Harfan in Mukhbir will remain one of my fondest memories which I will cherish forever. May Mukhbir continue to break more records and make everyone involved feel broader and taller”.

Director, Shivam Nair said, “I knew from the day we saw Zain’s audition that this boy is going to make it big, and I am glad that he trusted us and came on-board. I am happy to see him get all the love and admiration from fans as he truly deserves it. Zain and Harfan became one and the same during the shoot and I don’t think anyone else could have done a better job at playing this character. I am proud of the team for having achieved all that we set out to and I am thankful to the fans for showing Mukhbir with so much love and praise”.

‘Mukhbir – The Story of a Spy’ is streaming now exclusively on ZEE5!