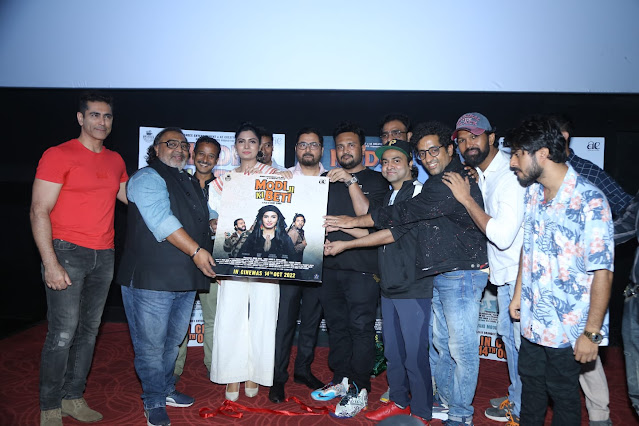 Mumbai:  The great comedy film, the trailer of soon to be released film 'Modi Ji Ki Beti’ was released today with much fanfare at PVR Icon in Mumbai. During the launch of the trailer not only the star cast of the film was present but many other graced the occasion with their presence. Apart from the trailer, a few songs from the film were also shown to the media during the launch event.

During the trailer launch of 'Modi Ji Ki Beti’, the star cast of the film - Avani Modi, Pitobash and Vikram Kochhar, Tarun Khan na, Director Eddy Singh ,producer Arpit Garg and associate producer Arshad Siddiqui were present and many others also made their presence felt and urged the audiences to watch this film.

Interestingly, Avani Modi has previously worked in many Tamil and Gujarati language films. Avani has received a lot of appreciation for her debut film. In 'Modi Ji Ki Beti’ Avani is in the lead role along with Pitobash and Vikram. Avani Said” The media is the one who made me 'Modi Ji Ki Beti'  I want to thank them. Modi Ji Ki Beti is very special to me. You'll enjoy the film and it also serves a great message. This film is for India it has no connection with politics.“

The Director Eddy Singh, has also directed several ad films in the past and makes his debut with “Modi Ji Ki Beti” as his first feature film. He said “ Modi Ji Beti is a total fun film and a joy ride and we are trying to give good entertaining films. After covid, we need something light to release our stress.“

The film is produced by AE Creatives and presented by Brandex Entertainment the film is being marketed by Brandex India, with Avani Modi, Eddy Singh, and Arpit Garg. stay tuned to get more updates on the film.