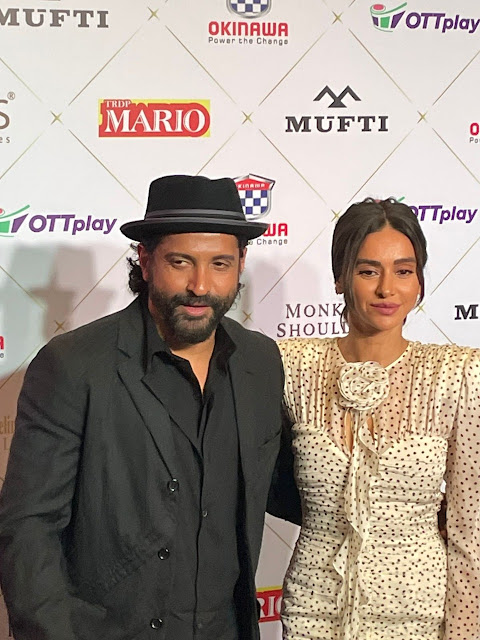 ~The event was graced by iconic figures from the film fraternity such as Vidya Balan, Kartik Aaryan, Pankaj Tripathi, Tapsee Pannu and many more ~

National, 10th September 2022: OTTplay, India’s newest OTT aggregator and one-of-its-kind personalized recommendation platform hosted the inaugural edition of OTTplay Awards in Mumbai. The awards aim to celebrate and recognize some of the most compelling films and shows as well as identify artistic excellence from India’s OTT ecosystem.

OTTplay Awards are India’s first-ever multilingual OTT awards that aim to highlight and reward extraordinary stories and storytellers across the country, irrespective of the region, language, and genre. Following the philosophy of  ‘One Nation, One OTT Awards’, this unique initiative by OTTplay platform brought together some of the most iconic stars and filmmakers from the world’s fastest-growing OTT industry under one roof at JW Marriott in Mumbai.

Talking about the inaugural edition of the OTTplay Awards, Mr. Avinash Mudaliar, Co-Founder and CEO, OTTplay said, “As we host the inaugural edition of OTTplay Awards, we aim to recognize the talent, stories and content generated by India’s OTT platforms in the past 1 year, keeping audiences entertained during the most unprecedented times faced by humanity. The phenomenal rise of India’s OTT ecosystem as a mainstream content delivery and consumption platform has truly been a testament to the love and support it has garnered from audiences across the country. Going forward, we are confident that the medium will continue to generate and offer ground-breaking content for audiences globally. On this occasion, we would like to congratulate all the winners, while also extending a vote of thanks to everyone who have been part of this celebration.”

A look at the all the winners from the big night:

Filmmaker of the Decade Pa. Ranjith

Best Actor in a Negative Role (Series) Kishore (She 2)

OTTplay is India’s first ever smart recommendation engine, which handpicks the movies and shows that match your taste and language preferences by diving deep into the most number of OTT channels. The platform has launched 5 subscription packs in partnership with 12 Indian & International OTTs and has introduced 4 international OTTs in India. With the launch of subscriptions on OTTplay, you can choose from our 5 exciting packs and stream content of your choice on our app, web and mweb platforms. OTTplay brings together popular Indian OTT platforms such as SonyLIV, ZEE5, LIONSGATE PLAY, Sun NXT, ShemarooMe, Curiosity Stream, ShortsTV, DocuBay as well as makes 4 international OTTs - Hallmark Movies Now, DUST, FUSE+ and Tastemade+ available in India, backed by AI-based recommendation and content discovery technology enabling viewers to navigate   the clutter of OTT content with sheer ease and convenience.