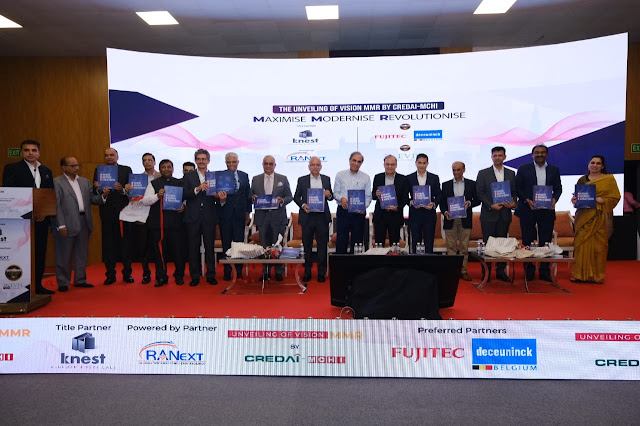 Through this initiative, CREDAI-MCHI as a stalwart entity draws key recommendations to act now to integrate, innovate and internationalise MMR through public private partnership and people driven development model. Some of the key measures as suggested by CREDAI-MCHI includes Integrated Urban Water Authority, rejuvenation of water bodies through river buddies program, dedicated mangrove parks, introduction of skill trucks, integrated data strategy, infrastructure investment fund board any many such innovative recommendations. The document also enlists some trends that will transform MMR including digitalisation of administration, electric vehicles ecosystem, better public transport system, sustainable and responsible construction practice among others. The state government and CREDAI-MCHI jointly plan to act on these trends through a proposed committee of subject experts from public, CREDAI-MCHI and Government of Maharashtra.

Commenting on the launch of the policy initiative, Mr. Boman Irani, President, CREDAI-MCHI said, “MMR is one of the key growth drivers in the real estate industry with many buyers wanting to invest in the ‘City of Dreams’. In a changing world, Mumbai is grappling with several obstacles which are hindering its growth including inadequate water resources, improper waste management, rising levels of pollution among others. With this policy initiative, CREDAI-MCHI aims to turn its key recommendations into a reality, with the joint efforts of the Government of Maharashtra and MCGM to transform Mumbai into a self-sustainable world-class liveable city.”

Mr. Dhaval Ajmera, Hon. Secretary, CREDAI-MCHI said, “Being the Business, Entertainment & Financial Capital of India, Mumbai has the potential to transform into a world-class city with a good quality of life and vibrant economy. The vision document covers key aspects which require immediate attention for overall improvement of the area. This will give a major boost to several industries and improve environmental conditions within the region, making it one of the best places to live in for its citizens.”

Mr. Keval Valambhia, COO, CREDAI-MCHI said, "This vision document envisions a complete revamp of the region with an impetus to innovate urbanism, keeping environmental protection as a major priority to weed out outdated production capacity, reduce emissions, enhance the protection of water and land resources, and build MMR into a sustainable eco-region. The initiative also draws a concrete blueprint with an optimistic vision for a Mumbai without its ongoing challenges like waterlogging, slums, poverty, unemployment, and noise."

CREDAI-MCHI is an apex body consisting of members from the Real Estate Industry in the Mumbai Metropolitan Region (MMR). With a strong Membership of over 1249 leading Developers in Mumbai, CREDAI-MCHI has expanded across MMR, having its own units in the region of Thane, Kalyan-Dombivli, Mira-Virar, Raigad, Navi Mumbai, Palghar-Boisar, Bhiwandi, Uran-Dronagiri, Shahapur-Murbad and recently had announced units in Alibag, Karjat-Khalapur-Khopoli, Pen. CREDAI-MCHI is the only Government recognized body for private sector developers in MMR and consistently working to make the industry more organized and progressive. CREDAI-MCHI under the aegis of CREDAI National which is an apex body of 13000 developers from across the nation had developed into a preferred platform with regard to a regional discourse on housing and habitat through its close and deep networking with the Government.