Athletes perform their best without any financial or mental pressure, enhance the prestige of the state by winning the title of Maharashtra in the upcoming national sports competition, Maharashtra Olympic Association President Mr. Ajit Dada Pawar said this while guiding the players of Maharashtra 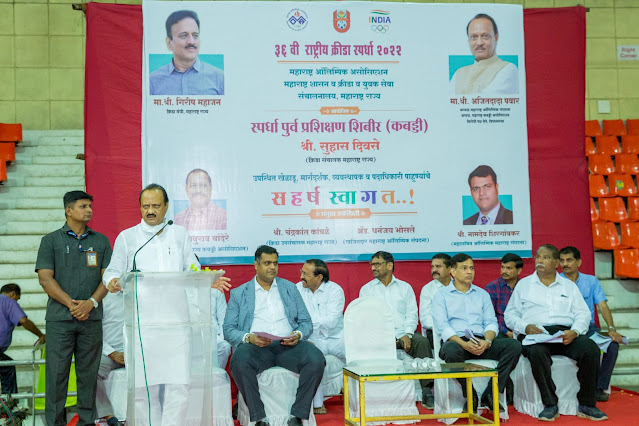 A training camp for various teams of Maharashtra has been organized at Shiv Chhatrapati Sports Complex for the upcoming National Sports Championships. These teams are represented by the Maharashtra Olympic Associationto which Mr. Pawar conveyed his best wishes. On this occasion the General Secretary of the Sangh Mr. Namdev Shirgaonkar and the newly appointed Sports Commissioner of the state Mr. Suhas Divse was present on the occasion.

Mr Pawar further said that a provision of Rs 4 crore has already been made for Maharashtra teams. If the players also need some more help, we will immediately contact the government and get this fund as well. The medal winners of the national sports competition will be given huge rewards and opportunities in government jobs.So players should focus on winning the title with confidence and positive attitude. The camp here is arranged with top class facilities and coaches, so I am sure that the players from Maharashtra will achieve the highest level of success.

Chhatrapati Shivaji Maharaj had looted gold treasure from Surat. Now the players of Maharashtra should loot the gold medal from Gujarat, said Mr. Divse. We are trying to provide best quality facilities and training and guidance of other experts to the athletes for the upcoming National Games. This guidance will be useful not only for the competition but also for the future life.Players must maintain discipline and good behavior both on and off the field. The state government and Maharashtra Olympic Association will work together not only for these national competitions but also for the development of players in the state in future.

Expressing confidence that athletes from Maharashtra will get top quality training in the upcoming national sporting event on the strength of the best facilities to be the first in the medal tally. Shri Shirgaonkar said that a team of about 900 athletes and coaches from Maharashtra is participating in 34 sports in this competition. In preparation for the tournament, the camps of the players of Maharashtra are going on at different places.We have appointed a coordinating officer for each game to avoid any inconvenience to the players or coaches in the camp. Along with this a coordinating officer has been appointed by the State Sports Department. Every player is being looked after very well. So I am sure the players will not face any problem. Players will be sent by plane for this tournament.

State Deputy Director of Sports Chandrakant Kamble, Maharashtra Olympic Association treasurer Dhananjay Bhosale and several sports guides were present at the function. The captains of various teams of Maharashtra were felicitated in this ceremony.