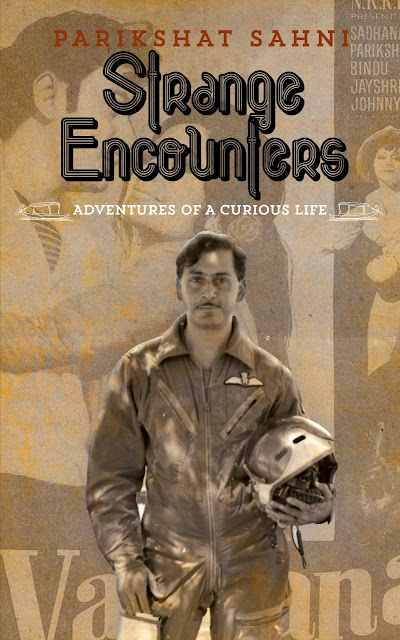 Anupam Kher, Deepti Naval at Parikshat Sahni’s book launch open up about their own curious experiences

Mumbai 28th August 2022: Simon & Schuster India released 'Strange Encounters' by veteran actor Parikshat Sahni. The book was launched today in Mumbai, by celebrated actors Anupam Kher and Deepti Naval. This book is an invitation to people to bring out their own “strange encounters” to the table or around the bonfire, to open up conversations about their own exciting memories with friends and family, unlock their past as candidly and humorously as the hosts and the author did at the launch.

“This book is a hybrid of essays, reminiscences and commentaries… stray incidents that made an impression on me during my travels through life. Written down as they came to me in my contemplative moments, this is an unweaving of memories from my days as a film student in Russia to settling in India and embracing Bollywood and celebrity," shared Parikshat Sahni, actor and writer.

“I love the title ‘Strange Encounters’ very much, it’s brought back so many of my own memories… because it’s such a universal occurrence. Everyone, at some point in their life, experiences something remarkable, a story worth telling. I always believe your failures become your best stories. Because of this book we got to meet today and speak with and of old friends. This is the intoxication of books, to hold a copy in your hand and discuss it with loved ones,” Anupam Kher shared during the launch.

“There are so many charming stories about Russia, India, Pakistan… ghost stories, film stories, love stories. I wish him all the best for this book, I have waited for this book, these exciting stories for such a long time. I have always known Parikshat ji is a sensitive writer. I can’t wait for the next book, the next ten books, from his pen,” Deepti Naval said during the launch.

PARIKSHAT SAHNI is an Indian actor who is best known for playing the lead roles in Gul Gulshan Gulfaam (Doordarshan), Gaatha (Star Plus), and Barrister Vinod. He has also appeared in Rajkumar Hirani's films Lage Raho Munna Bhai, 3 Idiots, and PK. He is the son of noted actor Balraj Sahni and nephew of Bhisham Sahni, a celebrated writer.

“A straight-from-the-gut kind of a collection from renowned actor Parikshat Sahni, even though every chapter talks about a specific kind of encounter, it encapsulates his life’s journey perfectly. A book written with a kind of honesty and lightness of touch that’s getting rarer.” Sayantan Ghosh, Senior Commissioning Editor, Simon & Schuster India.

Strange Encounters is a book of essays and stories inspired by Parikshat Sahni's experiences in Russia, India and Bollywood. Where his first book, The Nonconformist, is a biographical portrait of his father, Balraj Sahni, Strange Encounters aims to be a kaleidoscopic study of the self. It is a collection of travel portraits, impressions and life lessons that Parikshat Sahni has accumulated in his itinerant life, moving within the golden autumns of Moscow to the tune of Tchaikovsky, returning to Mumbai and his roots, entering Bollywood and finding fame.

Sahni chronicles stories from a life whose pendulum swings wildly from the humorous to the utterly horrifying. He confronts his thanatophobia on film sets and his atheism on an ill-prepared trek to Amarnath; he gives us drinking lessons with screenwriter friends and a profound insight into the state of culture wars in present-day Kashmir. He recalls the thrill of young love in Russia and its attendant treacheries of the heart, as well as a study of Pakistan, a history of India as the land of the many, and a look at the current political discourse through the eyes of a refugee.

Written with the usual Sahni penchant for erudite storytelling while still maintaining accessibility to uninitiated readers, Strange Encounters is a prismatic collection of memories, drawing its wisdom from Hindu, Judaic and Islamic philosophies; a multi-cultural, multi-faceted narrative of Parikshat Sahni's journey from being a film student in Soviet Russia to surrendering Stanislavsky for Indian cinema, finding peace and a place to belong along the way.

PARIKSHAT SAHNI is an Indian actor who is best known for playing the lead roles in Gul Gulshan Gulfaam (Doordarshan), Gaatha (Star Plus), and Barrister Vinod. He has also appeared in Rajkumar Hirani's films Lage Raho Munna Bhai, 3 Idiots, and PK. He is the son of noted actor Balraj Sahni and nephew of Bhisham Sahni, a celebrated writer.