Trailer of 'Haemolymph' is out 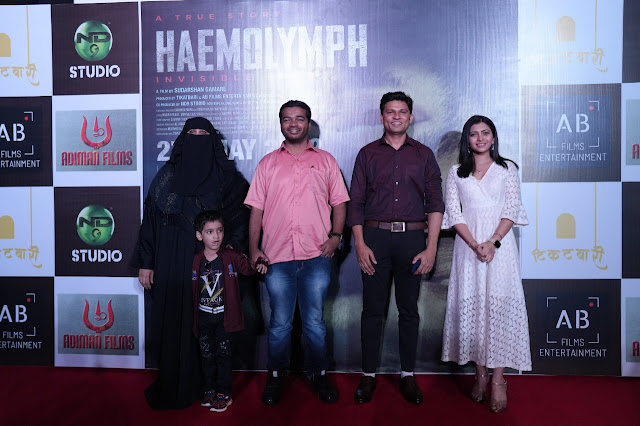 "Truth will ultimately prevail where there are pains taken to bring it to light," says George Washington, and taking a cue from the same debutant director Sudarshan Gamare follows the same thought process for his debut film 'Haemolymph - The Invisible blood.'

In the presence of real Wahid Shaikh, the makers released the trailer today, along with director Sudarshan actor Riyaz Anwar who essays Wahid Shaikh in the film. Haemolymph is a real-life story about a school teacher named Abdul Wahid Shaikh who was accused in the 11 July 2006 Mumbai train bombings case which not only ruined his life but also his family’s. The film is about his fight for justice and also about others whose lives have been impacted by the blasts.

The trailer showcases the suffering and recuperation of an innocent school teacher who is framed wrongly. The 2.06 mins trailer showcases his plight and the atrocities he and his family have to go through in his fight for justice. Talking about the same director Sudarshan Gamare says, "It's my first film, and the story is very close to me. I have been with this story for the last few years and I wanted everyone to see the struggles of a common man who gets accused. I am very happy with the response for the teaser and the poster received and hope the trailer also receives the same.”

When asked real Abdul Wahid Shaikh his thoughts about the film he says, "Many people approached me with the idea of making a film about me, but it was Sudarshan’s conviction that made me say yes for the film. His vision is to show exactly what I have been through without embellishment. Watching the trailer has given me a flashback of the horrendous years I have been through; I would also like to praise Riyaz who has played me on the screen. I hope this film reaches many people so they understand the pain a common man goes through when he gets entangled in criminal proceedings.”

Produced by Tikatbari and AB Films Entertainment in association with Adiman Films, the film is co-produced by ND9 Studios. The film is written and directed by Sudarshan Gamare. The film stars Riyaz Anwar who essays the role of Abdul Wahid Shaikh, Mujtaba Aziz Naza has done the background score the Dop is Rohan Rajan Mapuskar and the film is edited by HM. The film is slated to release in theatres near you on 27 May 2022.