IGDC unveils the first edition of ‘The Blockchain Gaming Summit 2022’! 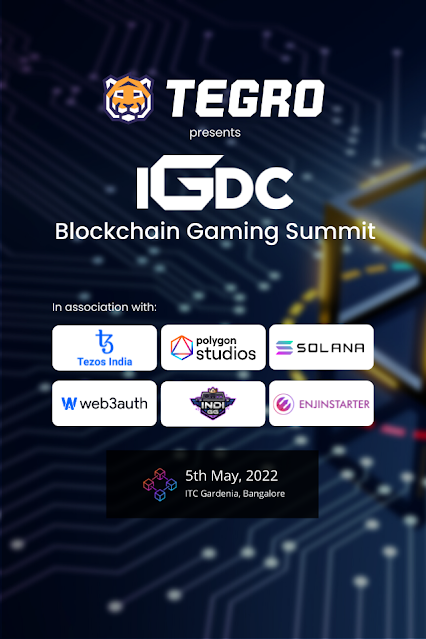 The Blockchain Gaming Summit 2022 is slated to be held in Bangalore, on 5th May 2022

National, 28th April 2022: India’s Largest B2B Game Developer Conference, India Game Developers Conference (IGDC) has today announced the launch of The Blockchain Gaming Summit 2022, to be held in Bangalore on 5th May 2022 at ITC Gardenia. With the ever-expanding blockchain, web 3.0 and metaverse concepts in India, The Blockchain Gaming Summit is set to be a conversation starter for game developers, industry leaders and blockchain enthusiasts.

Over the years, IGDC has played a key role in developing the Indian Gaming ecosystem by acting as a conduit for the industry by getting industry leaders to meet, interact and share their knowledge with upcoming studios, developers, and others in the Indian Gaming ecosystem. The one-day conference is on the quest to get the best of Indian and International minds in the blockchain and web3 sector to share their experiences, expectations, and predictions for the future through an intersperse of Keynotes, town halls, panel discussions and networking sessions. IGDC is confident that this Summit will also function as a catalyst to help the Indian Gaming Industry achieve its true potential of becoming a global leader in the Blockchain/ Web3 space.

The discussions will revolve around topics that will delve around the insights on web3 games and NFTs, postmortem of successful web3 games, how one can take the lunge from web2 to web3, Pros & Cons of different Blockchains & Exchanges, Checklists on launching blockchain games, Tokenamics Design and Community building, Compliance and Regulations.

Sharing his excitement about the event, Sridhar Muppidi, IGDC Council Member, said, “Blockchain games allow their players to become active participants, and they are your marketers, your investors, and your community. It's a brand-new way of looking at the business of video games, and we think India could be a leader in this space with its immense product leadership, which can translate well for designing robust and sustainable web3 economies. Through this conference, we want to educate the Indian game developers on the various opportunities web3 presents."

Commenting on Tegro’s association with The Blockchain Gaming Summit 2022, Roby John said, “Digital Worlds are now an investable asset class. We look forward to sharing Tegro’s journey in making this a reality with sustainable economy for players and investors at IGDC Blockchain Summit - 5th May 2022.”

Gaming being an integral growth prospect in the web3 space, Siddharth Menon, Co-founder, WazirX added, “Games are being disrupted with WEB3. Game assets are now becoming an investment class, this unlocks a huge potential.”

The Blockchain Gaming Summit 2022 is also supported by some of India’s best in the field with Tegro is the Presenting Sponsor of the event. The Gold Sponsors are Tezos India, Polygon Studios, Solana, EnjinStarter, Web3Auth, and IndiGG.

The conference is organized by industry volunteers, with support from corporates and the Telangana government. Now in its 14th year, IGDC is the biggest and the most significant developer conference not only in India but in South Asia. IGDC is a major catalyst in enabling the growth of the Indian gaming ecosystem and sees enthusiastic participation from game developers, publishers, and investors each year. Its goal is to support and empower game developers with insights, upskilling and networking opportunities in the presence of industry leaders and investors.