Battling it out on the dance floor: Josh wraps up Nach Baby Dance in a Grand Finale in Mumbai 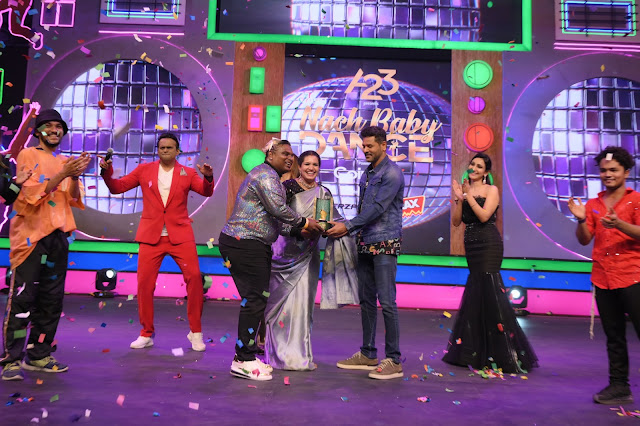 Mumbai, 26th April. 2022: Josh, India’s fastest growing and most engaged short-video app, wrapped up its hunt for India’s next dance icons in a yearly iconic event, Nach Baby Dance, in a grand finale in Mumbai, last evening. With A23, CoinDCX, Crax and Playerzpot as the sponsors, the event was a resounding success as celebrity judges Malaika Arora and Prabhudeva crowned Raja and Niki Naidu as the winners. Karan Bhatiya was awarded the best solo male dancer and Aishwarya Pandey as the best solo female dancer where cash prizes were given out.

The campaign, which span across the country, saw over 1 Lakh registrations out of which more than 200 entries were shortlisted as the finalists. Nach Baby Dance witnessed India’s best dancers prove their mettle in a friendly competition as they put on their best performances to dazzle and impress the celebrity judges and the audience to win their way to India’s best dance party. Also making a special appearance at the event was popular Josh creator Ablu Rajesh Kumar, a specially-abled dancer who left the audience in awe with his stunning performance.

“The response we’ve received for Nach Baby Dance has been absolutely amazing. This is a platform that recognises and nurtures Bharat’s diverse talent in dance. It is also a testimony to the potential that the creators of our country possess and passion they bring with it. I would like to congratulate all participants for dancing with Josh into this finale. It is when we witness performances such as those we have witnessed tonight, that we are reminded of the mission we are trying to achieve and the talented creator community we aim to showcase across Bharat,” said Seher Bedi, Head of Josh Studios.

“The performances we have witnessed this evening have been revelatory of the talent that is waiting to be discovered in India. A big congratulations to all participants here this evening. Each and everyone here danced with their hearts on their sleeves. It has been an absolute honor and pleasure to bear witness to the rise of India’s next dance icons. I can’t wait to see what comes next,” said Malaika Arora, Bollywood Actress.

“Dancing is something that is extremely close to my heart and witnessing everyone perform with such passion and energy this evening has brought me the greatest joy. I would like to thank the team at Josh for giving me the opportunity to be a part of such a wonderful event. I would also like to extend my congratulations to all the participants – each one of you is extremely talented. I hope your talent is something you will never give up on when you have platforms such as Josh helping you support your dreams,” said Prabhudeva, Indian Dancer and Choreographer.

“A23 as a brand resonates with Josh's mission to give talented communities in our country a platform to thrive on. Showcasing outstanding talent consistently is always challenging, and we congratulate those who are willing to put in their hard work. Be it gaming or dancing, the skills of an individual play a vital role in how far along the journey they go. A23 is proud to partner with Josh as it strives to give India's talented, upcoming creator community, an opportunity to realize their potential and pursue their dreams,” said Sudarshan, Head of Acquisition at A23.

Nach Baby Dance was kickstarted on 21st March. Spanning the course of a month, the event witnessed enthusiastic users from across the country submit their entries on the Josh app as they battled for the ultimate prize.