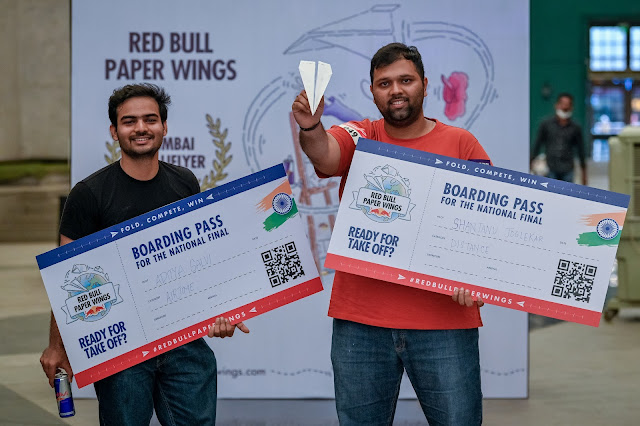 Shantanu Joglekar and Aditya Salvi who were triumphant in the Longest Distance and Longest Airtime categories respectively at the Mumbai Qualifier, now get an exciting opportunity of competing in the National Finals in April. All national final winners will then move on to represent India at the World Final in Austria in the iconic Hangar-7, where the world champions will be crowned.

Red Bull Paper Wings invites participants from around the globe to a global paper plane championship and the largest Red Bull student participatory event. The idea is simple and ingenious at the same time: students must make a plain sheet of paper fly as far, as long or as artistically through the air as possible. All national winners of the three categories – Longest Distance, Longest Airtime and Aerobatics - will be invited to the World Final in Austria in the iconic Hangar-7, where the world champions will be crowned. There, the champions crowned in each category will win a flight experience with the renowned Flying Bulls.

Forget cockpits and jet engines, all the equipment needed is an ordinary, commercial sheet of paper with a strong dose of exceptional folding abilities as well as creativity, imagination, and a grasp of basic aeronautic rules. Building a paper plane and letting it fly is an easy thing – you can do it everywhere with just one sheet of paper! It is the purest form of aerodynamics and therefore perfectly linked to the topic of flying and “Red Bull gives you wings”.

Calling all paper engineers and aerialists for the paper plane world championship to register - https://paperwings.redbull.com/in-en/