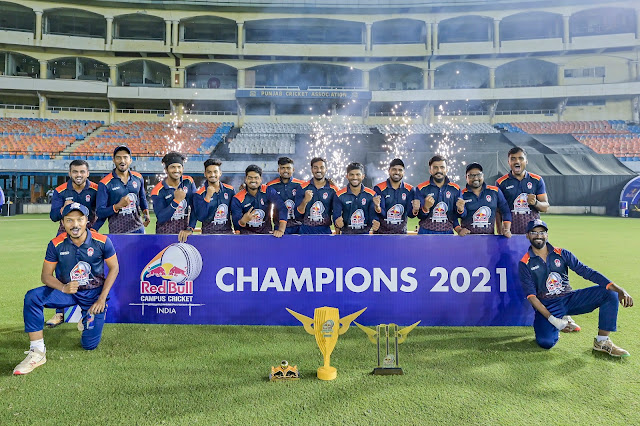 ~ The only global cricket tournament especially developed for university students, helping find the next generation of cricketing talent ~

National: 3rd March 2022, The 11th year of the only global cricket tournament for university students, Red Bull Campus Cricket is set to kick off in India across 33 cities with city qualifiers from 28th February to discover and nurture budding cricketers from college campuses. The Indian Premier League franchise Rajasthan Royals deepens their association with the energy drink giant Red Bull in India and plans to continue scouting talent from the annual international T20 tournament for college cricket teams – Red Bull Campus Cricket

The winning college from each city will then proceed to the zonal/regional finals in April. The top two teams from each zone in RBCC will then compete in the National finals in June first week. The National winner will then represent India in the Red Bull Campus Cricket 2022 World Finals. Past winners from India that have gone on to represent the country at the World Championships are Rizvi College, Mumbai; DAV College, Chandigarh; Swami Shraddhanand College, Delhi and MMC College, Pune.

Last year, The Red Bull Campus Cricket National Finals were held at the PCA Stadium in Mohali on 22nd October 2021 with a jaw dropping match between MMCC Pune and New LJ College Ahmedabad. MMCC College from Pune emerged victorious against New LJ College Ahmedabad by 2 wickets to be crowned the best cricket college university in the country for the fourth time in the competition’s history after emerging victorious in 2016, 2017 and 2018 previously.

This year, the qualifiers of the women’s tournament will be held in 4 cities - Mumbai, Delhi, Chennai and Ranchi - in April. The winner of the national final will be declared the best women’s college cricket team in India. A few players participating in the women’s championship will also get an amazing opportunity to interact with Smriti Mandhana.