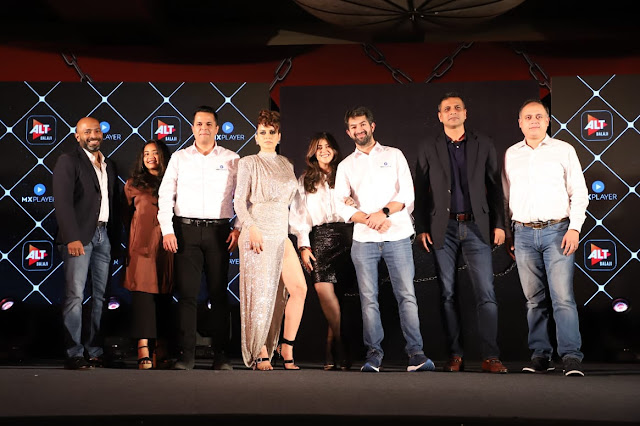 ~ The captive reality show will live stream 24x7 and see celebrity participants locked up behind bars with host Kangana Ranaut cracking the baton! ~

Mumbai, 3rd February 2022: Some imprisonments break you, while some make you tougher. One realizes the value of freedom only when one is locked up. Witness this for the first time in India, as streaming giant ALTBalaji & MX Player - India’s entertainment super app, announce the biggest and the most fearless reality show - Lock Upp: Badass Jail, Atyaachari Khel. In a never-seen-before reality show, 16 controversial celebrities will be put together in a lock up for months and will be stripped of their amenities. Adding to it, the Queen of Bollywood Kangana Ranaut will step in as a fiery host of the show.

Lock Up promises to be an engaging captive reality show with all the ingredients that will keep you glued to your seat. A daring celebrity host, compelling tasks, dramatic fights, and an interesting mix of contestants who will do anything & everything to survive in the jail is the perfect amalgamation of entertainment.

At the press conference, Content Queen Ekta R. Kapoor along with Karan Bedi, CEO - MX Media - announced the feisty Kangana Ranaut as the host for this first of its kind format. Also gracing the event were ALTBalaji Group COO - Zulfiqar Khan, Nikhil Gandhi - COO, MX Media and Mansi Shrivastav, SVP and Head – Content Acquisitions, MX Player who were present while unveiling the logo of this dynamic show.

ALTBalaji Group COO Zulfiqar Khan also announced that ALTBalaji will also introduce the world’s first fantasy metaverse game based on reality show. An innovation like this which is one of a kind and for the first time in India, this game will be introduced with Lock Upp where the audiences can play real and win real.

The Queen of Bollywood Kangana Ranaut quipped: “I am thrilled and excited for foraying into the OTT with such a unique and brilliant concept. The scale and reach of both ALTBalaji and MX Player are massive. I am sure this show will give me a great opportunity to get in touch with my fans and entertain them as the host of Lock Upp. I want to thank the boss lady Ekta for always being by my side, she has always been someone I admire and respect a lot. I am glad that she is there with me for my OTT debut as well. To all my fans out there, get ready for the most FEARLESS show ever!”

Speaking about launching Lock Upp, Content Czarina Ekta R. Kapoor, shares: “I am glad to announce India’s biggest & the most fearless reality show Lock Upp hosted by the powerhouse of talent and the dynamic Kangana Ranaut. Kangana has been a very dear friend, I am glad to support and congratulate her on her first digital debut. Lock Upp is being launched on a massive scale and has all the elements that make for an entertaining reality show. The concept of the show is brilliant, and I am sure that it will captivate the viewers and set a new-standard for reality shows. I am also glad that MX Player has partnered with ALTBalaji. I wish the team the very best and I am sure they will create history with Lock Upp and that it will be a roaring success!”

Karan Bedi, CEO - MX Media added saying, “MX has always been a market disruptor - our user first approach to create product and content experiences that appeal to our huge audiences’ segments has made us India's largest entertainment platform today. Lock Upp is yet another step in disrupting the Indian entertainment ecosystem as it is designed as a digital first non-fiction offering that will release on a scale that is unprecedented for India. We are excited to collaborate with ALTBalaji and with one of India’s finest actors - Kangana Ranaut.”

Speaking about the game, Zulfiqar Khan, COO - Group ALTBalaji shares, “ALTBalaji is proud to be the first in the world to launch a metaverse game that is based on a reality show. Gaming enthusiasts around the world can explore this fantastic world that we are creating with elements of blockchain and NFTs. It is going to be a very exciting release and will introduce the viewers to the dynamic world of Lock Upp."

Elaborating on how this format promises to be an audience favorite, Nikhil Gandhi, COO – MX Media said, “At the heart of MX Player’s success lies the ‘Global Indian’ consumer and we have constantly been working towards creating content as per consumer preferences, especially given the large user base of over 300Mn globally spanning across the US, UK, Middle East South East Asia and more that we cater to on our platform. There is a lot of potential for an edgy, larger-than-life, captive reality show that Lock Upp is.  And, with India's favourite Queen, Kangana Ranaut as the host and sixteen incredibly popular contestants who will do anything & everything to survive in the jail - we believe this format will surely be an audience favourite."

Speaking about this content partnership with ALTBalaji, Mansi Shrivastav, SVP and Head – Content Acquisitions, MX Player said, “MX Player's content design focuses on building a bouquet of engaging and entertaining offerings for our diverse audience and the biggest pillar of our content creation philosophy is our partnership with content creators and aggregators. To bring alive this unique captive reality series, we are thrilled to partner with ALTBalaji, one of the leading content creators in our country. Together, we share a belief in consumer obsession and with this unconventional nonfiction offering - we are hoping to win millions of hearts.”

ALTBalaji and MX Player will livestream this show 24x7 on their respective platforms and will have the audiences interact directly with the contestants. The audiences will be empowered to punish or award their chosen contestants and even play ‘Khabri’ to some of them. Produced by Endemol Shine India, the show premiers on ALTBalaji & MX Player from 27th February 2022.

Balaji Telefilms' forays into original shows on digital platforms, ALT Digital Media Entertainment Limited is a wholly-owned subsidiary of Balaji Telefilms Ltd. A multi-device subscription Video On Demand (SVOD) Platform, ALTBalaji gives audiences the content they want to watch - whenever, wherever, and however. ALTBalaji's offerings include premium, disruptive content, and original series across genres. With originality, courage, and relentlessness at its core, ALTBalaji's range, stands out for being avant-garde, non-conformist, inclusive, and effervescent. ALTBalaji is here to set new standards and benchmarks to connect contemporary audiences with an alternate content platform digitally.

MX Player is an entertainment super app that caters to over 280 million Monthly Active users in India, integrating all forms of entertainment on one platform – including video playback, streaming video, music and gaming. Defining “everytainment” for viewers with entertainment that suits every mood, it currently operates on an ad supported model and hosts a wide library of over 2,00,000 hrs. of premium content across 10 languages, including a critically acclaimed slate of MX Original/ Exclusives, movies, web series, TV shows, news and audio music. The app is available across Android, iOS, Web, Amazon Fire TV Stick, Android TV and OnePlus TV amongst others.

Having launched its gaming feature in February 2020, Games on MX Player has grown exponentially, and this tournament style slew of hyper casual mobile games is now available across its Android and iOS apps. MX Player has now spread its footprints across 13 markets including UAE, US, Canada, UK, Australia, New Zealand, Bangladesh, Nepal, Afghanistan, Sri Lanka, Maldives, Nigeria and Bhutan. MX has further expanded its business with the launch of its short format video app MX TakaTak - a home-grown platform that offers a wide variety of short form content and creation tools across genres that is home to the largest number of 48Mn+ unique content creators as well as MX ShareKaro that is an easy-to-use file sharing app with rapid transfer speed.