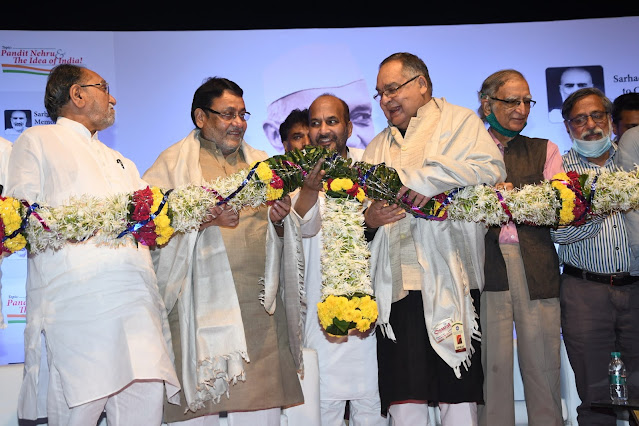 Topic of discussion- Pandit Nehru & The Idea of India!

13th November 2021 in Mumbai- Never before in Indian political discourse has Jawaharlal Nehru — and his idea — been so pilloried or celebrated, It is thus apt that a group of peaceniks led by Sarhadi Gandhi Memorial Society in the city organized a National Seminar to Commemorate the 132nd Birth Anniversary of Jawaharlal Nehru, First Prime Minister of Independent India.

He shaped the republic and underlined what it takes for democracy to deepen and for political order to work. Nehru was no less a counselor to India, constantly drawing attention to the principles and direction of its politics and society. He inspired, he cajoled, he rebuked. He also failed. He worked tirelessly to the point of exhaustion several times in his career.

Syed Jalaluddin says "His ideologies have guided through the development of the nation. Today we remember him and everything that he has taught us"
Posted by SUJATA TAWDE at 4:40 AM