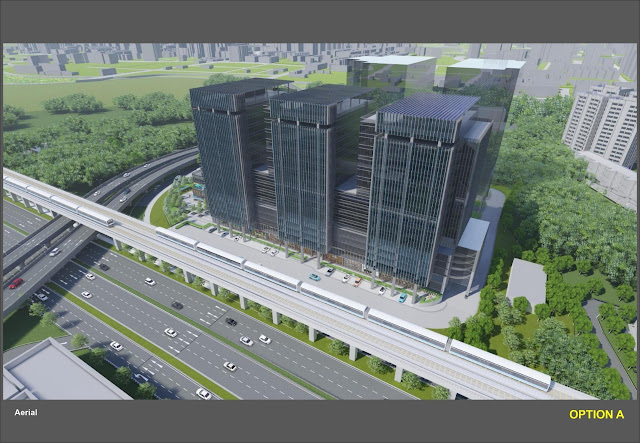 Kohinoor World Towers will be one of the largest commercial spaces in the region comprising of grade A office spaces, high street retail, alfresco & allied best in class amenities, in Pimpri.

The prime project is spread across 1.8 million Sq. ft, including future development.

Kohinoor World Towers(KWT) is a signature landmark for world class businesses to operate from a globally benchmarked workplace. Combination of innovation and effective collaborative spaces with retail and entertainment avenues within the vicinity were key factors in designing the marquee buildings. The towers are being built with high standards of sustainability and are IGBC Gold rated buildings, with usage of eco-friendly landscaping along with elegant and modern façade designs. It comes with 5 levels of parking, cafeterias, club houses, rooftop lounges, airconditioned lobbies along with international fire and safety system, CCTV’s, and smart card entries.

Kohinoor World Towers are constructed by H* Architecture, a global architectural firm, much-recognized name for their concepts and designs worldwide. They have designed the towers with compelling visual landscape with prominent appearance that is appealing to the eyes. The entrance is beautiful shrub-lined boulevard to welcome the employees and visitors. While designing the towers, the green landscaped zone has been kept as an integral part in the building giving a feel of being close to nature.

“We are in the post pandemic world and keeping in mind the work and commercial requirements, Kohinoor World Towers is being built. It is not just another address; it is going to be a signature address for businesses across the city. With iconic designs and architecture, Kohinoor World Towers will help rise in the business productivity. Connectivity wise, the project is well connected to Pimpri’s commercial market, all parts of Pune and other city which makes it one of the path breaking projects in the country itself. We believe these towers will redefine PCMC’s skyline and its business landscape by making it Pimpri’s new landmark”, says Mr. Vineet Goyal, Managing Director, Kohinoor Group.

Pimpri is the commercial hotbed for the major economic activities in the state with an annual growth rate of 15% every year and is considered as the Asia’s largest MIDC. Serving more than 4000 industrial units, Pimpri has multinational auto sector players such as Mercedes Benz, Volkswagen, JCB, Tata Motors, Bajaj Auto and Force Motors among the few of the renowned automobile brand. With its salubrious climate Pimpri has large green belts and abundant economic opportunities has made it a preferred location of choice for both residential and industrial purposes.

About Kohinoor Group: Kohinoor Group is a Pune based conglomerate primarily engaged in real estate, development of industrial parks, student housing and construction technology. In the last 37 years the group developed and delivered 6.5 million square feet across Pune and has given home to 5000+ plus happy families. Its student accommodation venture ‘Youthville’ has built a capacity of about 2000 beds at various locations in Mumbai and Pune. Today the group has developed and delivered over 6.5 million sq. ft across Pune and has over 3 million sq. ft of spaces currently under development. It also has diversified interests in other verticals like Manufacturing, Logistics and Services. Be it residential properties or commercial projects, Kohinoor always thinks about the needs and wants of their customer base before taking any decisions.

For Kohinoor Group businesses are the heart of an economy, and the spaces they operate from are the soul. Since 2001 Kohinoor Commercial has created stylish offices and smart retail spaces in Pune’s thriving business districts. Kohinoor pre-fitted top-notch amenities and specifications ensure that their business is ready to lead the race from day one. Working in a Kohinoor Commercial property will mean easy commuting access and a vibrant ecosystem for today’s evolving workforce to stay focused and driven. It keeps one ready to build an environment that encourages and empowers business growth.

The group’s philosophy of ‘Sada Sukhi Raho’, has helped them to create a strong consumer base of 5000+ happy families. They believe in not only creating a property but also raising the bar of quality each time. They strive to provide the correct mix of right location, right product, right price, delivered in time to all their customers. Even in the commercial segment, they have consistently created office spaces, shops, and showrooms for business owners at strategic locations that make perfect business sense. After constructing 10+ successful commercial projects across Pune city, the group is now coming up with 3 more commercial spaces in B-zone Baner, B-zone Shivaji-Nagar and B-zone Pimpri. Since 2001 the Kohinoor group has developed and delivered 7.27 lac sq. ft and there are 12.52 lac Sq.ft. under construction with 1.8 million upcoming commercial space in Pimpri - KOHINOOR WORLD TOWERS, and a plan to have 7 million "A" grade office spaces in the next 5 years.