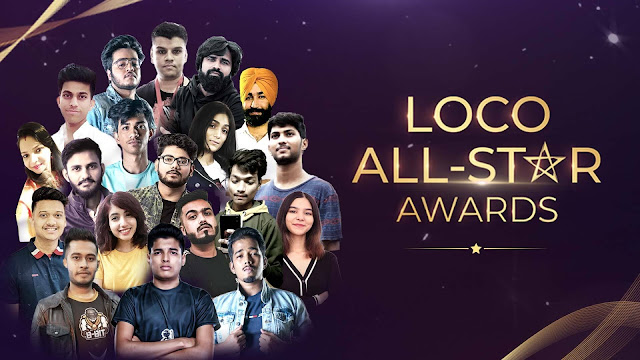 ~ The platform hosted a glorious Loco All Star Awards anchored by 8bit Thug on April 11, 2021 ~

India’s leading live game streaming and esports platform celebrates a successful year of #GamingTogether by hosting a grand award ceremony for its community. Over the last year, Loco has witnessed a phenomenal growth in building the esports and game streaming foundation that has brought an unmatched gaming entertainment experience to the Indian gaming industry. As a token of gratitude, the app hosted the award ceremony to recognize and honour popular streamers and teams who have contributed immensely to the platform’s success over the last one year.

Hosted by the legendary esports athlete and content creator 8bitThug, the awards spanned 12 categories of which 6 were data-driven and 6 based on popular choice. The Popular choice awards were carried out through live voting on the loco app. This saw a huge surge in fans tuning in to vote for their favorite streamers. The live award ceremony on the Loco app saw a massive turnout of fans.. India’s Top streamers - Mortal, Jonathan Gaming, Ghatak, and Sc0ut graced the event for presenting as well as receiving their awards along with other winners from different categories. In order to encourage upcoming and buzzing talent, Loco also recognized 2 unique categories - Emerging Star and Most Followed Streamer which was won by PSYCHO_VERIFIED and GamingWorld Verified respectively.