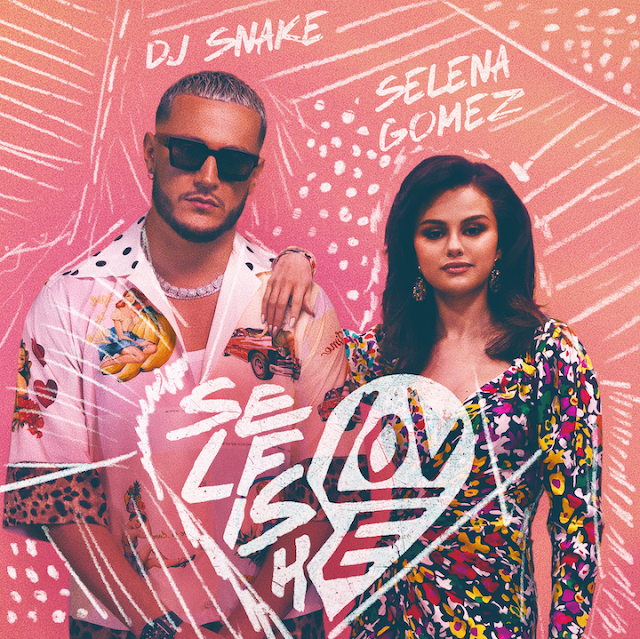 Multi-platinum producer DJ Snake has joined forces with pop superstar Selena Gomez for a bilingual and breathtaking new single called “Selfish Love.” Accompanied by a video from award-winning filmmaker Rodrigo Saavedra, “Selfish Love” is the second collaboration between the French DJ/producer and Gomez, who appeared on his four-times-platinum, chart-topping, record-breaking smash hit “Taki Taki” in 2018.

Listen to “Selfish Love” by DJ Snake &amp; Selena Gomez HERE https://umgi.lnk.to/SelfishLove?showcover=false and check out the video HERE https://www.youtube.com/watch?v=gQG_2O9Bu6c &quot;With the whole world being separated from each other I kept looking and working only on pure good vibes. I wanted to make music for the world and mix all my favorite influences of afro beat, latin music, something that felt grounded and organic. Selena and I had been talking and after “Taki Taki” we had to give the world another round with fresh summer vibes. Something that made it feel like summer the first time you heard it. “Selfish Love” came very naturally for us and I think it’s the perfect evolution for our history together.&quot; – DJ Snake on the release of “Selfish Love”

The first new music from DJ Snake since last summer, “Selfish Love” showcases his one-of-a-kind skill at fusing genres and styles, bringing the bouncy rhythms of Latin pop to his boundary-pushing electronic production. With its dreamy textures and delicate saxophone tones, the track centers on a beautifully bittersweet vocal performance from Gomez, who drifts from Spanish to English and back again with both incredible grace and plenty of raw emotion.

Also featuring Ozuna and Cardi B, “Taki Taki” premiered in September 2018 and soon became one of the most-streamed songs in Spotify history. It also reached No. 1 in sixteen countries across the globe, while its visual emerged as one of YouTube’s most highly viewed music videos of all time.

DJ Snake made his full-length debut with Encore, a 2016 album that reached #1 on Billboard’s Top Dance/Electronic Albums chart and debuted in the top ten around the world. Since scoring his first #1 with the four-times-platinum “Let Me Love You” ft. Justin Bieber, DJ Snake has triumphed with such colossal hits as “You Know You Like It” (with AlunaGeorge), “Lean On” (with Major Lazer, featuring MØ), and “Taki Taki” ft. Selena Gomez, Ozuna &amp; Cardi B. With its title translating to “the freedom to do whatever one chooses,” his sophomore album Carte Blanche arrived in July 2019 and shot to #1 on Billboard’s US Top Dance/Electronic Albums chart, in addition to reaching the top 50 on the Billboard 200. Thanks to the tremendous success of “Let Me Love You,” “Lean On,” and “Taki Taki,” DJ Snake now holds the distinction of being one of only two dance artists in the world to have three songs amass more than a billion streams on Spotify.

Selling more than 145 million singles worldwide and over 30 billion global streams it’s safe to say Selena has achieved great success as a recording artist.  “Lose You To Love Me,” the first single off her critically acclaimed album “Rare,” marked a historic moment for the singer as she landed her first No. 1 on the Billboard Hot 100 chart. The album debuted at the top of the charts; her third consecutive album to debut at No.1 on the Billboard Album chart.  Up next, Selena is set to release her highly anticipated EP “Relevación” her first all-Spanish language music project on March 12th.   Through her July Moon Productions Gomez has produced a fearless slate of both television and film including the hit Netflix original series “13 Reasons Why.” She went on to produce the critically acclaimed Netflix docu-series “Living Undocumented.   Currently, Gomez serves as executive producer and appears on the buzzworthy hit HBO Max cooking series “Selena + Chef.”  Last year, Gomez launched her beauty line RARE Beauty exclusively with Sephora in the U.S., Canada and Mexico. As part of the partnership, Gomez launched the RARE  Impact Fund , pledging to raise $100 million for mental health services for individuals in underserved communities.