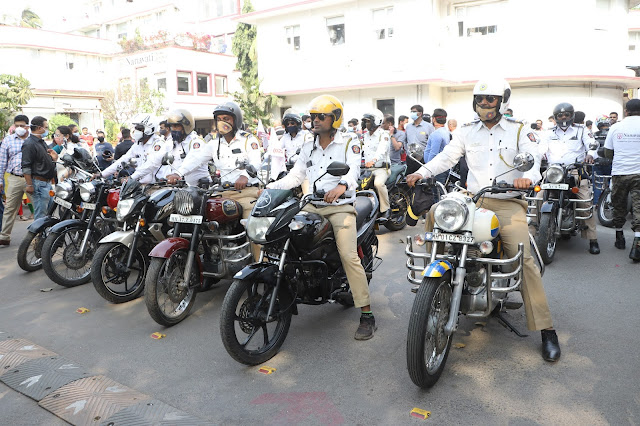 The motorcycle rally culminated a month-long road safety campaign as a part of the first ever National Road Safety Month 2021. Objective of the campaign was to create awareness about road safety regulations and create an army of effective first responders in the event of road accidents.

Earlier this month, Union Ministry for Road Transport & Highways launched the first ever National Road Safety Month from January 18 to February 17, 2021. Aim of the campaign is to reduce the preventable deaths due to road accidents by 50% before 2025. Over 415 people have been dying in India everyday due to the preventable road accidents.

As a part of the campaign, Nanavati Super Speciality Hospital, under the guidance of Mumbai Traffic Police, organised the rally with prominent motorcycle groups to spread awareness about road safety norms and guidelines. Over 50 motorcyclists included citizens, top management of Nanavati Hospital, doctors, support staff and traffic policemen. The participants were felicitated for their contribution by Mr. Somnath Gharge, DCP (Western Suburbs) with badge of honor, certificate and a medal.

During the month-long campaign trail, a team of trained emergency medical experts from Nanavati Hospital offered Basic Life Support (BLS) and Cardiopulmonary Resuscitation (CPR) training to employees of Mumbai Traffic Police, Mumbai Police and their families at Police Colony of Santacruz. Similar workshops along with educative skits by Mumbai Traffic Police were organized for citizens at four prominent city malls and Juhu Chowpatty.

Core first responders to any medical emergency on the road, such as drivers of BEST buses, auto-rickshaws, ambulances and BEST Bus conductors were also trained at Andheri and Santacruz Bus Depots and Nanavati Hospital under the initiative.

Elaborating on the objectives of the initiative, Dr. Akshay Deodhar, In-charge–Accident and Emergency Department, Nanavati Super Speciality Hospital said “Post-pandemic normalcy has stirred intense movement and activity in the city, leading to a substantial increase in road accidents. As much as people are aware of road safety protocols, accidents and medical emergencies are on the rise. This campaign is an attempt to help citizens with basic safety tools and measures in the face of a road casualty whilst imparting them necessary knowledge on safe travel,” said Dr. Deodhar.

Commenting on the initiative, Mr. Manpreet Singh Sohal, Director and Chief Operating Officer, Nanavati Super Speciality Hospital said, “We are obliged to be associated with Mumbai Traffic Police for this integral campaign. We wholeheartedly support the decision to extend the Road Safety Week into a Month from this year on. Under the guidance of Mumbai Traffic Police, we have carefully planned a number of effective activities for all important stakeholders of the society. The prolonged mass awareness about Road Safety and disaster management techniques will pave the way towards our national goal of Zero Road Fatalities by 2030.”

After a long time read such a noteworthy post, I would like to invite you to our website to have a look and review the same for more assistance in the same field. Also visit: mobile application development company