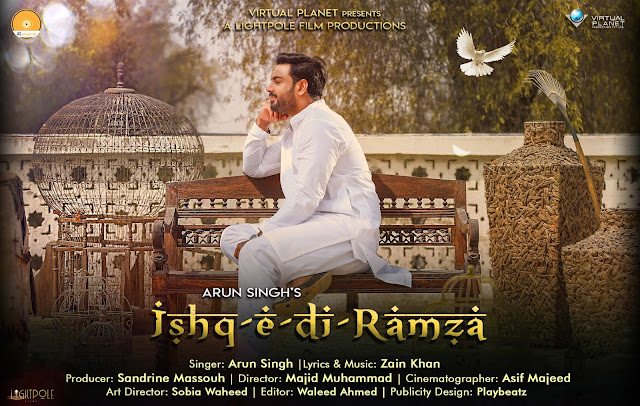 (You are my heart, you are my life I’ve made you my world, Tell me how lonely you are after leaving me… I didn’t know that love is so dishonest)

These beautiful words will tell you how wonderful love is! This is another innocent love song by Dubai-based singer-songwriter-composer Arun Singh that has raised a storm after he released this single, Ishq-e-Di Ramza, on his YouTube channel recently. His current project was recorded at the Playback Lounge, Dubai, and presented by Virtual Planet Music. In the wake of the Covid-19 pandemic, Singh launched this track on YouTube and other social media platforms worldwide.

The new release is Singh’s first Punjabi song. He believes it is a story and an experience that the audience will be able to relate to easily as he, himself, went through the varied emotions firsthand, which made him want to translate his feelings into music.

The song is about two lovers who get separated from one another and start living in different countries, but their memories are still alive in each other’s hearts. Later, the man decides to find his love and start a new life with the woman again. Unfortunately, he finds that she has moved on, but finally their strong love, still alive in each other’s hearts, wins out.

This track is his fourth original in a row. His first single, Chhukar Mujhe, was released in January 2020, and the following month, Jeena Tere Bin was released in February 2020.

After this, he released his third original, Roya Hoon Main, in June 2020. ‘The best is yet to come’

‘We’re in a new age of music and I’m part of it. I believe that the times are changing and evolving and so is music. Music is not only of one genre, or one instrument. It is a fusion of all forms together to make something good out of it. My music is a melting pot of cultures, mixed with a predominantly modern Bollywood influence, infused with a Western touch, incorporating indie pop, rock, poetry, street music and music of everyday life. I’d like to tell my audience to stay tuned in for my new projects. The best is yet to come and my team and I are working on new and upcoming releases’

• Has been singing from childhood

• Arun made his debut with the song, Bhunoor Bhunoor, for the film, Phullu, with music by Vickky Agarwal