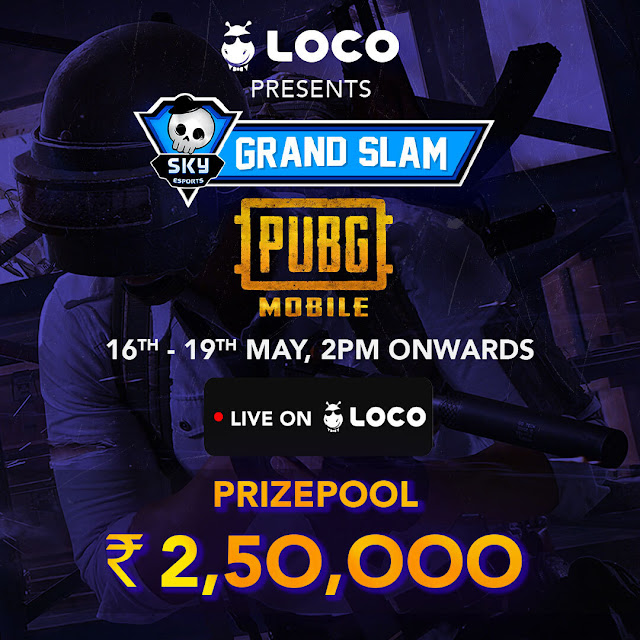 National, 14th May 2020: Chennai based esports company, Skyesports, has entered into a partnership with game streaming and esports platform - Loco to bring gaming and esports  'Skyesports Grandslam'. The month-long gaming tournament is one of the largest esports tournaments being held with some of the most popular players and teams in India. The games will stream live on LOCO and will also be available on Skyesports YouTube channel with live commentary available in Hindi and Tamil.

The tournaments will stream every week offering a total prize pool of INR 5,00,000 across various titles such as Call of Duty: Mobile, PUBG, World Cricket Championship Rivals, etc. The second week (16th -19th May) will showcase some of the most popular esports titles in India such as PUBG Mobile along with participation from topmost teams like Soul, Fnatic, TSM-Entity, 8Bit, Orange Rock, Team Tamilas among others. This PUBG Mobile tournament will be streamed exclusively on Loco, with live matches commencing at 2:00 pm.

Skyesports and Loco recently concluded a successful week-long tournament for Call of Duty: Mobile where some of the top teams in COD: M India were invited to participate in the event. The winners of this tournament were Team Mayhem, who took 1st place and a grand prize of INR 30,000 followed by Global Esports who placed 2nd at the event.

Speaking about the tournament, Shiva Nandy, CEO of SkyEsports said, “This is an exciting format for us and we are looking at organizing tournaments across various titles. It's a great opportunity for many gamers to get into competitive gaming with the titles they love to play. Loco is building the home of Indian game streaming and they were natural partners for us. We hope to do bigger and better things with them in the future!”

Speaking about the partnership for this tournament, Anirudh Pandita, Founder, Pocket Aces, the parent company of Loco said, “Loco is pleased to collaborate with Skyesports, who have been pioneers in the esports space. After the resounding success of our previous tournament with Fnatic that witnessed a total viewership of 5.8M, we are excited to bring our viewers another outstanding offering featuring the best teams in the country. Furthermore, with this tournament we will be offering live commentary in Tamil, allowing us to better serve our Tamil-first users!”

Skyesports and Loco recently concluded their inaugural tournament together. The winners of this tournament were Team Mayhem, who took 1st place and a grand prize of INR 30,000 followed by Global Esports who placed 2nd at the event.