Budapest based Baltazar Theatre to stage ‘DANDELION’ with 12 ‘Down Syndrome’ artists at NCPA! 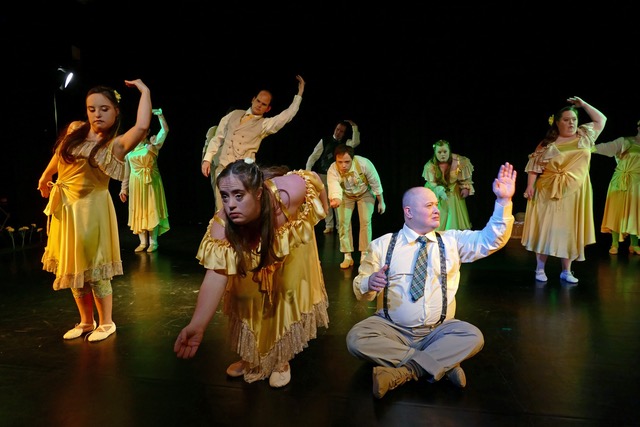 The Budapest based Baltazar Theatre is a unique professional theatre company whose members are mentally disabled actors. Hungarian director Dóra Elek founded the Baltazar Theatre in 1998. Baltazar Theatre breaks new ground by putting actors’ disabilities in the background emphasizing their talent. Their mission is to demonstrate the skills and artistic talent of the differently abled thus facilitating their social integration. The National Centre for the Performing Arts in Mumbai has invited Baltazar Theatre for a LIVE performance of their play ‘Dandelion’ which is divided into 2 parts,  scheduled on 16th and 17th March 2020, with their 12 actors and actresses living with mental disability (Down syndrome).
DANDELION is a dance-theatre performance in two parts with an interval in between. The first part, titled ‘Dandelion’, is based on 20th century love poems. The play is inspired by a famous 19th century Hungarian impressionist painting and uses music from classics like Debussy, Ravel, Mozart and Bach. Dance is a poetic language, the choreographer Olivia Reti-Harmath and the director Dóra Elek tried to find the connection between movements and words. The second part of the performance titled ‘Dust’, is a kind of search game. The performers will find out What sort of dust is it after all? The one that bothers when a gust of wind blows it into our eyes? Or the magical one in a kaleidoscope? Perhaps both at the same time, Or a little bit later in a different life. The whole piece is happening as someone is lying on the grass of the spring meadow watching the clouds. It is about humans, feelings, connections, humor and beauty. The performance is an experiment to find out and show what we can’t do otherwise: ourselves.
Hungarian director Dóra Elek shares, “Performing ‘DANDELION’ is a rare occasion for the Indian audience to witness the performance of a truly unusual artistic group that sets a socially important example that their disability doesn’t stop them from showing how talented they are”. Dóra hopes that play will prompt the Indian viewers to see themselves through the eyes of those who come from a faraway corner of the world. Dora Elek further adds, "We hope Mumbai will appreciate and enjoy the play at least as much as all the members of our group.”
About Baltazar Theatre Company:
The Baltazar Theatre Company has been living in the attraction of India right from its inception. They practice yoga and some of their performances are linked to Indian culture. The documentary film by Baltazar Theatre Company “Lend me your eyes, Baltazars” which records the journey of the mentally challenged members of the Company to India is dubbed in Hindi and Tamil languages, and has won the best director’s prize in documentary film category at the Jaipur International Film Festival in January 2018. In the course of the past two decades Baltazar Theatre Company staged numerous critically acclaimed performances both in Hungary and abroad proving that the word ‘disabled’ means completely nothing when it comes to levels of artistic expression.