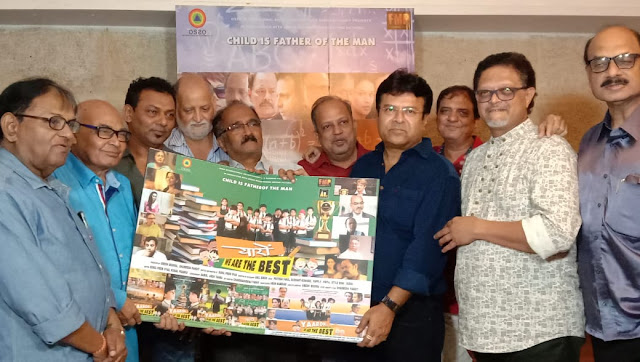 The concept , the theme of ' Yaaron.. we are the best ' is the Universal truth and still we ignore it royally.

This story is totally in sync with all Indian children in general and Metro children in particular.
Basically all parents,  love their children as they are their own but when it comes to education , career , almost all of them behave like Hitler the dictator. Our children don't have the freedom to choose their friends , career and follow their dreams.

"Yaaron we are the best" depicts the  story of two foes turned friends Ajay , Raghu , their over-ambitious parents , loving grandparents, the ruthless principal, other school students and most of all the cut-throat competition in every field.

All the child artists have done a great job of making the audience understand their agonies. The senior actors act according to their high calibre. The story is gripping . The direction is crisp and the editing is cut-to-cut.

A special screening of the children's feature film ' Yaaro we are the best' was held for five hundred  school children on 14th November at Movie Star Goregaon. The film depicts a story of school children who  face parental pressures and still they show their love and affection to fellow students which ends in a stirring climax on the sports field.

Satish Pujari of Audio Labs has acquired the audio rights of Osso international entertainment and Dharmesh Pandit presentation ' Yaaron we are the best' . He released the audio of the film along with veteran journalists Jyothi Venkatesh under Mohan pannu, Shyam Sharma, Amit Mishra and Virendra Mishra at hotel Spice Goregaon on 14th November. Producers Umesh Mishra and Dharmesh Pandit also were present along with the media personnel's on the occasion
Posted by SUJATA TAWDE at 6:37 PM