A MUSICAL NIGHT OF THE DYNAMIC DUO Dr. Jaspinder Narula and Shivamani 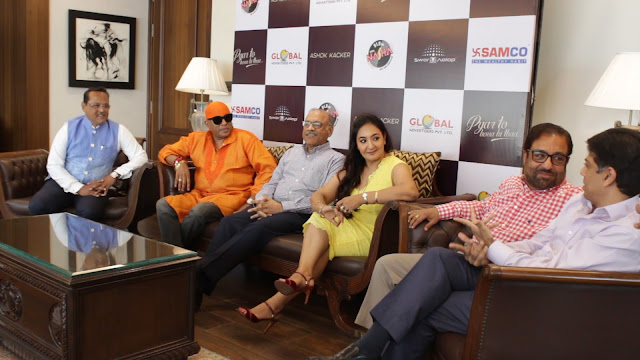 The night will have Dr. Jaspinder Narula and Shivamani perform, the event is organized by Ashok
Kacker and Swar Aalap

Ashok Kacker, a passionate Melophile, believes in providing stage to vocal and instrumental legends
of the music community. An emotional Kacker feels that the music of the golden era gives us a sense
of belongingness - 'Retro times and good music'. These terms together make people think about the legendary musicians we have been lucky to have over the years, the blissful lyrics and the soothing voice of artists. But somewhere in the fast-growing world, we often fail to admire them and provide them with the platforms they richly deserve.

Mr. Ashok Kacker, a well-known face in Mumbai and a passionate lover of music believes that such
musicians should be bestowed with great opportunities where they get a chance to showcase their
talent and create their image in public. He is a big enthusiast for music of the golden era and has been
closely associated with several legends in the past. Kacker joining hands with Swar Aalap, founder
Dinesh Ghate equally believes in felicitating and providing stage to instrumental heroes and has been
continuing the legacy from past 17 years.

After several joint endeavours in the past, they are once again proudly coming up with a designed
initiative ‘Pyar Toh Hona Hi Thaa ’, on 9 th Nov, 2019 at Bal Gandharv Rang Mandir. Where two
versatile legends will be performing, Dr. Jaspinder Narula and Shivamani.

This will be an interesting evening showcasing the Indian Aesthetics of the Sensational voice, Dr.
Jaspinder Narula and the Energized Rhythmic patterns of Shivamani. Swar Aalap is a cause by a
musician for musicians and Mr. Ghate, the initiator of Swar Aalap has left no stone unturned into
making this vision a reality. Talking about his love for music and the musicians, Kacker said, “Music in itself is healing, it's an explosive expression of humanity. It is something we are all touched by, no matter what culture we're from, what age group we belong to, whatever mood we are in, everyone loves music. It is one of the most decorated pieces of art we have with us.”

Further talking about his collaboration with Swar Aalap he said, "Swar Aalap and I have an association of over a decade. As one of the most versatile and innovative company they have always looked upon each musician as a shining star and we are glad to have this opportunity again to come up with 'Pyaar toh hona hi thaa'. The programme will bring before you a tuneful and a harmonious fusion of Vocal and Rhythm. A class by itself... one of its kind. In an amazing combination never seen or witnessed before, you will hear the two legendary icons, Dr.Jaspinder Narula and Shivamani, performing tied together on the stage, creating magic and music for the night.

Profiles of the Organisers and Performers.

Mr. Ashok Kacker, Chairman - INB Services, is a passionate Melophile. He believes in providing stage to vocal and instrumental legends of the music community. He feels that music of the golden era gives us a sense of belongingness - 'Retro times and good music'. A well-known face in Mumbai and an esteemed personality in the business fraternity, Kacker finds his muse in music. He recognizes that performers should be bestowed with great opportunities so that the art and creativity within them can excel and prosper.

Mr. Dinesh Ghate is an entrepreneur who has a passion of increasing a pinch of taste in the music world every day. He tries to redefine music in his way through ‘Swara Aalap’ Established in 2002. He holds the beautiful idea of recognising and providing glory to behind the scene musicians working in Hindi Film Music since 1935. Dinesh Ghate has to his credit co-compilation of a set of 6 books named ‘Music Masti’ which is found on the book rack of every music lover in the world. His efforts and hard work led him to create a festive mood in wedding by converting it into a grand musical concert using 51 Musicians in a fera ceremony. Every bit of Dinesh Ghate and Swar Aalap is dedicated to music and is still running successfully with the blessings of more than forty musicians who gave their life to the Indian music industry.

Dr.Jaspinder Narula is a celebrated Bollywood playback singer who is also famous for her Sufi, Ghazal, western and Punjabi signing. Her Soulful, Indian Aesthetic Singing pattern has made her singing style unique in the industry. Her voice became a huge sensation after her chartbuster "Pyar toh hona hi tha" from the 1998 film Pyar Toh Hona Hi Tha for which she won both 1999 Filmfare as well as Star Screen’s Best Female Playback Singer’s Award. The other significant films she has sung includes Mission Kashmir, Judai, Virasat, Fiza, Soldier, Major Sahib,  Mohabbatein, Phir Bhi Dil Hai Hindustani, Bunty Aur Babli and many more. In 2008, she also won
the title of India's Best Live Performer in the NDTV Imagine’s professional singers reality show, Dhoom Macha De. A unique combination of Bollywood as well as classical singing, she is also a doctorate in Hindustani Classical Music from Delhi University. In almost 45 years of her professional career, as she started at the age of 8yrs, she has rendered her voice for almost all languages, regions, styles, films, albums etc. She has a voice that echoes feelings and sentiments the majority recognizes.

SHIVAMANI, A legend Percussionist - Disciplined in Carnatic rhythm tradition and Western Jazz drums! Played around the globe with the finest International artistes and Indian artistes like Zakir Hussain, Shankar Mahadevan, Trilok Gurtu, A.R. Rahman & Louiz Banks. His steady search for new techniques, sounds & rhythmic configurations crowns him as incredible performer. The star icon is currently endorsing the biggest International brands in music, right from Roland to Zildjian to Pearl to Remo to AKG. Recently making his debut as a film music composer with the Tamil film Arima Nambi. Shivamani added another feather in his hat by winning the BEST NEW MUSIC COMPOSER award. This master has been recently conferred upon with the most prestigious PADMASHREE AWARD.
Posted by SUJATA TAWDE at 6:30 AM