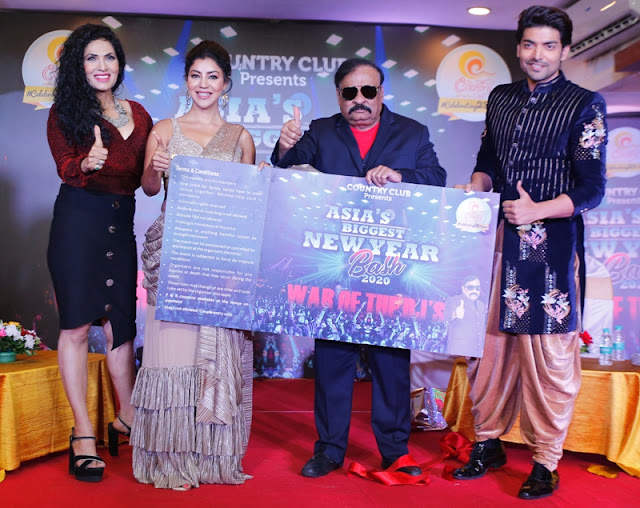 Country Club Hospitality & Holidays Ltd, (CCHHL) India’s leader in leisure and entertainment, today announced Asia’s Biggest New Year Bash 2020. As a part of this, Country Clubs across India and abroad will usher in the New Year 2020 with grand celebrations that would include celebrity performances, pulsating entertainment and sumptuous food.
According to CCHHL Chairman Mr Y Rajeev Reddy, for the past 12 years, Country Clubs have had some of the grandest New Year celebrations and this year would be no different.
Mr Reddy stated Country Club has roped in Mr. Gurmeet Choudhary and Ms. Debina Bonnerjee who would perform at Mumbai. Similarly, Country Club has planned extravagant DJ nights at its various locations in Dubai, Delhi, Pune, Kolkatta, Hyderabad, Chennai, Bengaluru, Ahmedabad, Surat, Goa and Kodaikanal.
This year, Country Club is set to get the whole country to dance its way into the New Year with rhapsodic performances by the most acclaimed DJs in the country. New Year’s Eve at Country Club is sure to be a  Clash of the Titans as some of the best DJs give members a night they will remember.
Performances for Country Club members and their guests will begin 7pm on December 31, 2019. Over the years, Country Club’s has given its members the most incredible celebrations and the aim remains to surpass last year’s celebration with an unparalleled, member-centric New Year’s Bash that is sure to be the talk of the town.
CCHHL is India’s largest leisure and entertainment conglomerate. It has 55 clubs across India and abroad with over 4 lakh members and is recognized by Limca Book of World Records as “India’s Biggest Chain of Family Clubs”. Country Clubs are known for their fitness and clubbing facilities, as also for star-studded high profile entertainment events they organize all throughout the year for their members.
Posted by SUJATA TAWDE at 6:01 AM

Great Content.
Happy New Year 2021 Is ahead and if you are planing for the best to make your new year 2021 more speical then you can get ideas from below links

Hello, thanks you for sharing this article with us, it will be really helpful for me to understand about the country club announces asias in detail. I appreciate your step for choosing this topic. Great article!! You have done a good research I must say, thank you very much for sharing this article. I found this https://femmefatale.co.nz/ Having loads of data, if possible do have a look

You are absolutely correct and thanks for giving information about the country club announces asias the biggest. I loved your blog and thanks for publishing this!! I am really happy to come across this exceptionally well written content. Thanks for sharing and look for more in future!! When you look for same type of great content, like here then check out this http://www.vipstrippers.co.nz/ also.

Wonderful post! Celebrating New Year in Dubai was a dream come true for me. I am planning to apply for a Dubai Visa again as my family wants to spend a fun-filled summer vacation. We will be hitting the water parks, popular restaurants & renowned tourist destinations to experience Dubai in all its glory. We might check Country club’s services in Dubai for accommodation needs & if it fits the bill then everything would be set for our upcoming Dubai trip.

Admittedly this isn’t always easy, especially if there’s several hundred of them. But if you’ve got a question to ask you may find someone’s already answered it.

Commenting on a blog is an art. Good comments create relations. You’re doing great work. Keep it up.

Happy New Year in advance! If you are planing for the best to make your new year more speical then you can get ideas from below link....