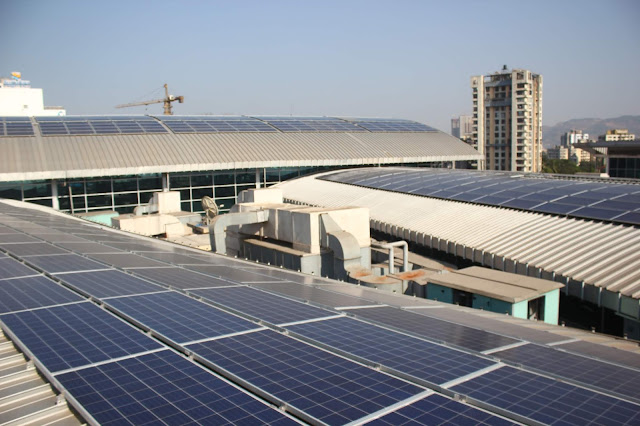 Viviana Mall, a leading retail mall in the Mumbai Metropolitan Region, has increased its rooftop solar power installation by over 35% to 1,340 KVA. This means about half the common area electricity the requirement is now being met with by this renewable source of energy generation.

In December 2016, Viviana Mall had installed 900 KVA rooftop solar power plant at their premises. This made Viviana Mall the first retail premises to have such a vast rooftop solar installation generating 100,000 kilowatts per month.

The decision to increase the capacity was taken after the mall’s management realized the benefits accruing from generating power through renewable energy.

Now, after having covered about 50% of common area power a requirement, the mall's management is looking forward to covering maximum electricity consumption through green energy.

On augmenting of the installed solar capacity, Manor K Agarwal, CEO, Viviana Mall said, "As a role model for sustainable progress, the Viviana Mall is well on course towards achieving its goal of maximizing the generation of its power requirements through renewable or clean energy sources. Renewable energy has significant environmental benefits making it the single biggest driver to help us meet our carbon emission reduction targets in our fight against climate change. With India being a growing economy, power consumption is only going to rise. The adoption of alternative sources of energy is the ideal way to manage the balance between economic growth and a sustainable environment.”

Viviana Mall has been taking up various environmentally responsible initiatives in the past and installation of rooftop solar power is one such initiative in the same direction.

It is well known that Earth will run out of natural resources if power generation solely relies upon thermal-based electricity production, which also contributes to air pollution. Hence, measures are being undertaken by bringing in renewable energy.

Even the government has set a target of 175 GW of renewable energy to be installed by 2022. Of this target, the government wants to have 100 GW of solar and 60 GW of wind energy and rest from other clean energy sources. Recently, the Institute for Energy Economics and Financial Analysis, in its report had mentioned that India needs faster implementation of rooftop solar to meet India’s 175 GW renewable energy target.

“Having covered 60% of Viviana Mall’s energy requirement, we are moving in the right direction to contribute to meeting India’s renewable energy target in our own way through this initiative. With this measure, Viviana Mall is also leading the way in environmentally friendly operational the model that a retail establishment can have,” said Agarwal.

Rooftop solar not only offer an economical and clean an alternative to conventional energy sources but also delivers reliability in power supply.
Posted by SUJATA TAWDE at 6:55 AM

Thanks for this excellent. I was wondering whether you were planning of writing similar posts to this one. .Keep up the excellent articles! Gold Coast Solar

Nice reading, I love your content. This is really a fantastic and informative post. Keep it up and if you are looking for Green Homes Grant then visit Energy Support Link.