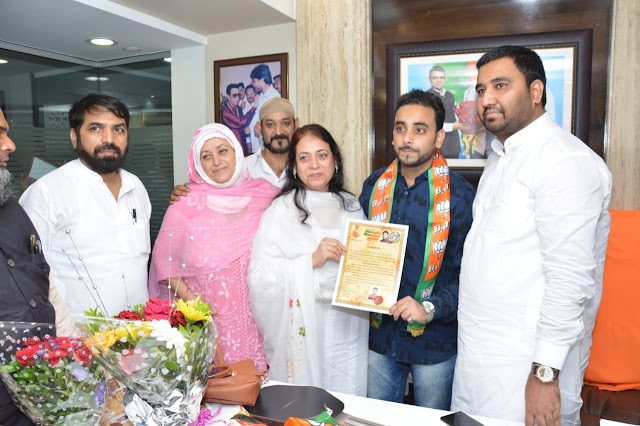 Ali Abbas Sultan Ahmed  is the son of Late Sultan Ahmed who was an Indian film director,producer and also president of IMPPA association in the 1970s, 1980s, and 1990's who assisted K. Asif for the legendary movie Mughal-e-Azam. He is also famous for his  films like Heera, Ganga Ki Saugandh, Dharam kanta, Jai Vikranta and Daata .

Ali Abbas  Sultan Ahmed joins BJP's  Nav Bhartiya Shiv Vahtuk Sanghatna as the All India Rashtriya Upadhyashk (Vice President), The declaration was done on Friday after Jummah Namaz at Haji Arfat Shaikh office in Kurla. Event was attended by Renowned Bollywood Actress Isha Kopikar who is Head of Ladies wings of the  Sanghatna, President of the Sanghatna Haji Arfat Shaikh who is  also Maharashtra State Minority Commission (Cabinet Minister Status) and the President of the Maharashtra State Muslim Khatik Samaj Unit.
Sharing his excitement Ali Abbas Sultan Ahmed Says "Firstly I would like to thank Allah. It's an immense honour & privilege to be given this opportunity for being apart of the biggest Union of India BJP Nav Bhartiya Shivwahtuk Sanghatna which looks into various issues in the transport wing for the betterment of the Nation & it's people. I Would like to thank Mananyeh Shri Haji Arfat Shaikh ji & Ashish Shelar ji for having the trust & faith in me and considering me the rite fit for this Sanghatna. With such an appointment comes great responsibilities where all of us at the sanghatna together under their leadership are looking forward to do some great work."
Posted by SUJATA TAWDE at 1:45 AM