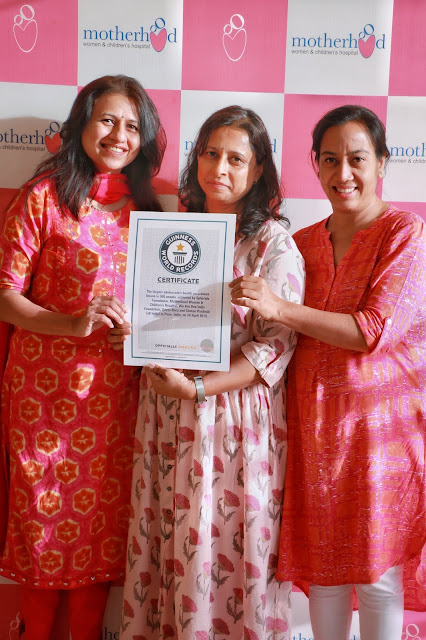 Motherhood Hospitals and Spherule Foundation (an NGO that works on various development and educational program for women-empowerment and health) bags Guinness World Record Certificate for conducting largest session on menstrual hygiene.  The event took place last year on April 24, 2019 at Kendriya Vidyalaya School where 300 students (both adolescent girls and boys) were present.
The record in which the Motherhood Hospital and Spherule Foundation participated is one of the 40,000 world records that are held on the Guinness World Records database.
Menstruation is one of the vital processes of a woman's body which deserves utmost caution and self-care. Ensuring proper hygiene during menses is essential during those difficult days of the month. Lack of appropriate awareness on essential facts on menstrual hygiene could lead to itching, burning, vaginal and urinary tract infections, infertility and other reproductive health complications. With an objective to help young girls achieve a healthy vaginal health, Motherhood Hospitals and Spherule Foundation with this initiative and conducted largest adolescent health awareness lesson and bagged Guinness World Record Certificate.
Dr Krishna Mehta, Facility Director, Motherhood Hospital Kharadi, said, “- As the Facility Director of Motherhood Hospital in Pune and a woman both, it was an overwhelming experience to participate in such an awareness campaign on menstrual hygiene and get global recognition by way of receiving the Guinness Book of World Record Certificate. It is a matter of pride and honour to know that Motherhood Hospital, as a Corporate Group of hospitals, is taking such initiatives for the betterment of society at large, especially women & children.”
Dr Rajeshwari Pawar, Consultant, Obstetrics & Gynaecology, Motherhood Kharadi, highlighted, “Growing up, as a kid, there were very few shows that would air on tv, of which the Guinness Book of World Records was one of the few prestigious ones. When I was asked to be a speaker for an attempt at the Guinness Book of World Records, I was thrilled. In addition, to be educating young girls about lessons that we may have never received, was the icing on the cake. I would like to thank my institute, Motherhood Group of Hospitals for this once in a lifetime opportunity to be a part of the GBWR.”
“Even though we are conducting menstrual health & hygiene sessions in schools across India throughout the year, this session was unique because we were attempting a Guinness World Record. It had to be perfect and as per Guinness guidelines, we had to strictly abide by WHO guidelines too. It was a wonderful experience. All doctors who were witnessing this event, students who participated and we as an NGO, were not only excited but also had the feeling of pride that with this record, we are trying to break the taboo & secrecy behind this subject,” concluded Dr Geeta Bora, Founder, Spherule Foundation.