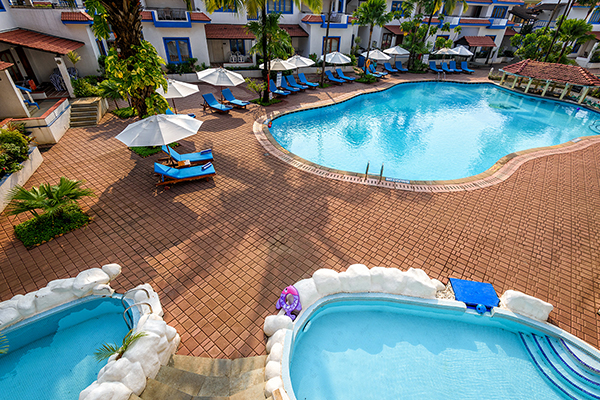 Karma Group has announced a return to Thailand’s Koh Samui with the opening of Karma Apsara, a
tranquil oasis located on the pristine coconut grove slopes of the fabled holiday island. Located on an
elevated slope in Mae Nam along Koh Samui’s breathtaking north coast, Karma Apsara brings
together 32 spacious one and two-bedroom residences offering both garden and ocean views.

Karma Apsara is located just five minutes from Mae Nam Beach with its sugary white sand and
swaying palm trees, while Koh Samui airport is just 15 minutes away. Besides its stunning natural
attributes, Mae Nam features an excellent golf course, eateries and boutiques, while the town of
Chaweng is just a short drive away. Featuring a pretty horizon pool with panoramic views, an on-site
restaurant and bar and private beach access, Karma Apsara is the ideal gateway to discover one of
southeast Asia’s most fabled islands.

“Koh Samui is one of my favourite islands in south east Asia and as Karma previously developed a
highly successful resort on the island, I am delighted we are returning,” said John Spence, Founder
and Chairman of Karma Group. “Karma Apsara, named after the mythical water nymphs, is located in the north of the island close to pristine white beaches and the Santiburi golf course, making it a
perfect base to explore the spectacular local surroundings or just kick back and relax by the pool. We
are currently undertaking a rolling renovation program to make the resort even better, according to
Karma’s high standards.”

Karma Apsara’s 32 spacious rooms are perfect for everyone. Guests can choose from a range of one-
bedroom studios and one or two-bedroom residences, ranged around a pool overlooking Mae Nam
bay. All feature comfortable king or queen-sized beds and en suites.

Guests can relax poolside with a signature Karma Apsara cocktail, iron out the kinks from that long-
haul flight with a relaxing Thai massage with one of Karma Spa’s bodyworkers or take a stroll through the perfectly tended tropical gardens. If feeling like a longer walk, guests can head to Mae Nam beach or opt for a round at the Santiburi golf course, just 3km from the resort.

Karma Apsara’s semi al fresco restaurant features floor to ceiling glass that open to create a seamless
transition between interior and exterior spaces. Guests can enjoy a selection of exquisitely prepared
local dishes inspired by Thai street food traditions, as well as international favourites. There is a great
selection of fine wines from the resort’s well stocked cellar as well as cold, refreshing local and
international beers and a wide range of cocktails.

KARMA GROUP is an award-winning international travel and lifestyle brand offering extraordinary
experiences in the world’s most beautiful locations and is headed by Chairman and Founder, John
Spence, former Ernst & Young Entrepreneur of the Year and member of the judging panel for the Ernst & Young World Entrepreneur of the Year. John has been honored by being awarded the Edward P. Bass Honorary Fellowship at Yale in the Fall Semester of 2019 in the School of Architecture, marking the first time Yale has extended this to the same person more than once. He has also been awarded a Distinguished Visiting Fellowship at UCLA as well as working with students from the University of Pennsylvania to design a chateau development in Carcassonne. The Karma Group is comprised of Karma Resorts, Karma Retreats, Karma Royal, Karma Estates, Karma Beach, Karma Spa and Karma Boutique. The Group is currently operating 33 resorts in more than 10 countries, including Australia, France, Germany, Greece, India, Indonesia, Thailand, Vietnam and the United Kingdom.

There are currently five properties in development and the Group is negotiating three separate
acquisitions in Scotland (a golf resort), Cyprus, and Bulgaria. In 2016, Karma group and Sanctum Hotel Group announced a joint venture to develop a series of authentic rock ‘n’ roll styled and orientated hotels in strategic locations around the world, accompanied by an exclusive private membership club, now with over 85,000 members. In 2017, Karma were awarded the contract to manage and develop the golf course on Rottnest Island in Western Australia and in Greece, RCI, the worldwide leader in vacation exchange, selected Karma Group to manage its operations in the Greek market whilst redevelopment began on Karma Minoan in Crete. Karma Group is a sponsor of the England Rugby 7’s team, as well as the Rosslyn Park HSBC National Schools Sevens, the world's largest school rugby tournament. Karma Group recently invested in its first racehorse with a view to future expansion of its stable.

www.karmagroup.com
Posted by SUJATA TAWDE at 4:55 AM