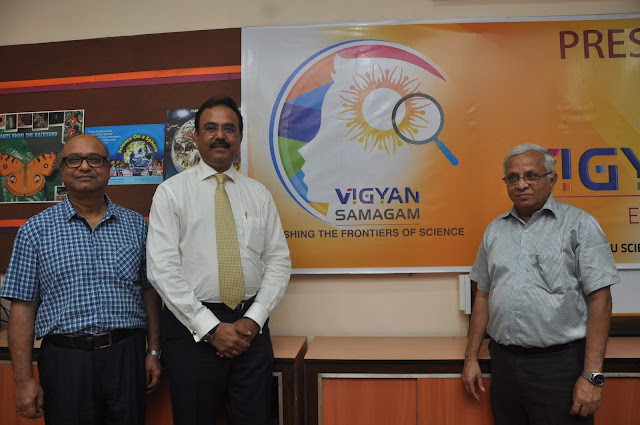 Vigyan Samagam to reach Bengaluru, Kolkata and New Delhi after Mumbai in its 11-month journey

Vigyan Samagam exhibition will travers you through the world from micro to macro, unveiling the efforts of the international community in understanding the Universe. It will showcase India’s participation in the world’s major Mega Science projects, where several developed countries are participating collectively.

Vigyan Samagam exhibition will take you through the workings of the Universe. From
discovery of the Higgs particle to that of gravitational waves from merger of neutron stars
and black holes, these projects throw light on crucial questions related to the origin of the
Universe and its evolution through its various stages. The Mega Science Projects in which
India is participating are the Large Hadron Collider (LHC) at the European Organization for
Nuclear Research (CERN), ‘Facility for Antiproton and Ion Research’ (FAIR), ‘India-
basedNeutrino Observatory’ (INO), ‘International Thermonuclear Experimental Reactor’
(ITER), ‘Laser Interferometer Gravitational - Wave Observatory’ (LIGO), ‘Thirty Meter
Telescope’ (TMT) and ‘Square Kilometre Array’ (SKA) for this purpose. All these projects will
be showcased during the Exhibition at a single place.

The global, Mega Science Exhibition ‘Vigyan Samagam’ will also provide answers and
insights into the exciting world of front-ranking science and technology to science
enthusiasts, students and people at large.

World’s first-ever, global Mega Science Exhibition ‘Vigyan Samagam’ will be the platform
where all major Mega Science projects will be showcased at a single place. The Exhibition
will begin in Mumbai on May 8 th , 2019 at the Nehru Science Centre, Worli. The Department
of Atomic Energy (DAE) and the Department of Science and Technology (DST) are jointly
organising this Exhibition. National Council of Science Museums (NCSM), Ministry of Culture
have joined hands by providing venue for the exhibition and also taking care of the design of
the exhibition.

Vigyan Samagam will be a multi-venue Science Exhibition conducted for 11 months in the
cities of Mumbai, Bengaluru, Kolkata and New Delhi. The Exhibition in Mumbai will be open
for visitors from 8th May, 2019 to 7th July, 2019 at Nehru Science Centre, Worli. After
Mumbai, it will be in Bengaluru from 29th July, 2019 to 28th September, 2019 at
Visvesvaraya Industrial and Technological Museum. It will then be open to public at Kolkata
from 4th November, 2019 to 31st December, 2019 at Science City. In its final leg, it will
reach New Delhi at the National Science Centre from 21st January, 2020 and will close on
20th March, 2020.

The organisers DAE and DST, and NCSM have planned this Mega Science Exhibition of a
global stature in a unique way and with a distinct objective. The Exhibition will not only
showcase India’s contribution to international collaborations on fundamental science and
research but will also provide a common interactive platform for Mega Science Projects,
industry, academia and institutions.

Shri Arun Srivastava said, “Vigyan Samagam is an endeavor to bring Science projects,
overlapped with technology, a step closer to the society and highlight the value and impact
of fundamental research to a broad cross-section of stakeholders. Cutting across students,
academia, scientific organisations and the industry, this Exhibition shall provide a unique
science communication platform and create a bridge for further interactions between India
and its global peers, bolstering India’s contribution to globally prestigious science projects.”
Dr. Praveer Asthana said, “The exhibition will also aim to connect with school children,
students and aspirants who want to pursue fundamental science and research as a strong
career option. It also provides a unique platform to all stakeholders for cross-fertilisation of
ideas.”

Explaining about the format of the Exhibition, Shri Srivastava added, “The Exhibition will
have themed-based galleries of posters, working models and exhibits, informative audio-
visual content and electronic displays and interactive kiosks will be setup for each of the
Mega Science Projects. The inaugural event at every venue will be followed by a two-day
scientific event comprising invited talks and lectures by eminent speakers from the field of
science, technology and industry.”

Global, Iconic Scientific Organisations to participate:
Vigyan Samagam will have the presence of prestigious organisations such as CERN, FAIR,
INO, ITER, LIGO, TMT and SKA. The audience would also include invited members from
various scientific organisations, industry and academia. Coinciding with the scientific
discussion during the first two days at each venue, industry partners working with the

Connecting with School Children, Students: A key objective of Vigyan Samagam:
In each city, a number of activities engaging the curiosity, attention and imagination of
school children and students will be taken up. Activities such as quizzes, essay-writing /
drawing contests and popular outdoor programmes like science awareness cyclothon etc.
are planned.

In order to reach out to people at large and get them involved with this Exhibition, Vigyan
Samagam has launched a website www.vigyansamagam.in where people can get more
information about it. It will soon launch a mobile application Vigyan Samagam. Events such
as talk shows, lectures planned during the Exhibition at each of the four places will be
streamed live through popular social media platforms.

Exhibition will be open on all days including Saturdays, Sundays and Holidays. At Nehru
Science Centre, Mumbai, the timing will be from 10 am to 6 pm.
Posted by SUJATA TAWDE at 4:16 AM