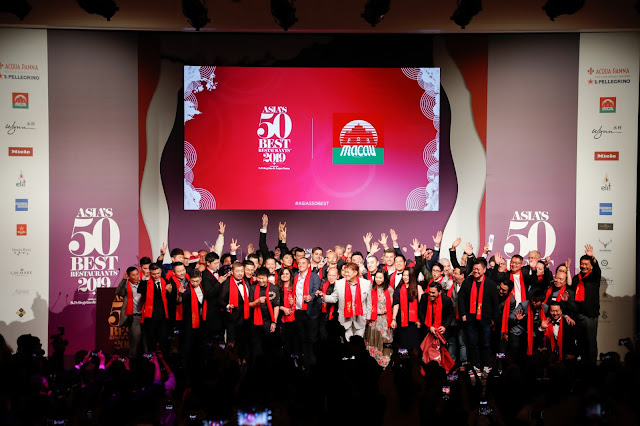 The list of Asia’s 50 Best Restaurants 2019 was unveiled recently in Macao at a gala event at Wynn Palace. Top chefs and restaurateurs from across Asia -gathered in Macao to witness the announcement of the highly anticipated annual ranking of the fifty most influential restaurants in Asia along with the presentation of several individual awards.
Two restaurants based in Macao, Jade Dragon and Wing Lei Palace were included on Asia’s 50 Best Restaurants 2019, one more than last year, in a list that fully displayed the multicultural and multinational talent of the dining industry in Asia.

Organized with the support of Macao Government Tourism Office (MGTO), Macao hosted the world famous gourmet awards for the second consecutive year as part of its efforts to promote as a UNESCO Creative City of Gastronomy.

Alexis Tam, Secretary for Social Affairs and Culture of the Macao Special Administrative Region (SAR) Government, , was among the guests of honor attending the occasion that saw the countdown from 50 to number 1 of Asia’s 50 Best Restaurants 2019., Odette in Singapore, led by chef Julien Royer, was crowned “The Best Restaurant in Asia 2019.”
The evening also saw the announcement of several individual country awards selected among those ranked on the list, with Alexis Tam handing the award to the Best Restaurant in Thailand, Gaggan, also number two on Asia’s 50 Best Restaurants 2019 list. Other nine individual awards were also handed at the occasion, in categories such as Sustainable Restaurant Award, Asia’s Best Pastry Chef, Miele One to Watch Award, among others.
Posted by SUJATA TAWDE at 6:08 AM